What Dead Parent(s) Would You Like to Know More About?

Like a Victorian melodrama, Sailor Moon has its fair share of dead parents. Which ones are you most interested in finding out more about?
Sailor Moon Says #BLACKLIVESMATTER #TRANSLIVESMATTER #GOVEGAN #WEARAMASK

Likes: The Blizzard Prince and FloraKiraraHime

In a Best Case Scenario, all of them.

I'm also going to say that I wish I'd know a little more about all the deceased parents!
"Dreams are hopeless aspirations in hopes of coming true, believe in yourself, the rest is up to me and you"
July is Chibi Chibi Month!

I did come up with a horrible backstory for them once, at least for an AU that was a fusion of the manga with the anime. I gathered the two of them were not the loving couple you would imagine, but a bickering pair of adults who jointly loved their son but hated each other. They were arguing with each other that fateful night of the auto accident and their car swerved head on to hit another car on the winding road.

As a result of the crash, Mamoru was hurt with a head injury, but he was able to get out and he saw that his parents were dead. He was completely scared out of his mind, but even as a confused youth he went to the other car, where the other driver, a woman, was killed, but was able to take the baby out of the car, who was in a car seat, unharmed.

That other baby was Hotaru Tomoe.

In this AU, the Furuhatas came on the scene and called for help, making sure that the baby Hotaru and Mamoru were taken to the hospital. But Hotaru's mother, and Mamoru's parents did not survive the impact and died right there.
Princess Nadia - Code Name: Marle

Manorous parents , partly we get the less about them.
Likes: FloraKiraraHime

Makoto's mother.
I would love to know how she inspired Mako and to know how different/similar they are.
Likes: FloraKiraraHime

Mako’s parents, for sure.

Click to expand...
considering he died when Mamoru was 8 probably not much raising.
Likes: Neo King Rose

Frenchfries&AChocolateMalt said:
considering he died when Mamoru was 8 probably not much raising.
Click to expand...
*6

Given that Mamoru looks exactly like his dad, maybe he was his clone? 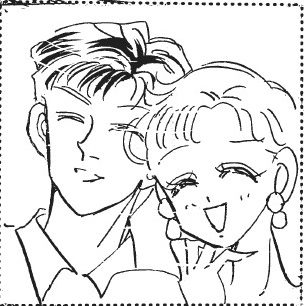 Ale6 said:
Makoto's mother.
I would love to know how she inspired Mako and to know how different/similar they are.
Click to expand...
We know that Mamoru was 6 when his parents died, but we don't really know how old Mako was (though the live action series makes it seem like she was about the same age?). So maybe she remembers her mother, maybe she doesn't.

But given how she seems to use her parents' death as pick-up line, I'm going to say Mako is secretly a psychopath who tampered with the plane's engine, causing the crash, so she could off her parents and live in her own, plant-heavy bachelor pad.

I'd most like to know about Mako's parents. The situation is sad but we know so little about them that their deaths are not particularly effective from a storytelling standpoint. Finding out more about them could possibly answer some of questions surrounding them too. (What were their jobs? Which one was she closest to? Why didn't another relative offer to raise her after their passing? etc.)
Likes: MementoNepenthe
You must log in or register to reply here.
Share: Facebook Twitter Reddit Pinterest Tumblr WhatsApp Email Link