Deleted and Altered Scenes from the 90s Anime?

MementoNepenthe said:
Episode 166: Usagi (as Princess Serenity) was supposed to become Eternal Sailor Moon thanks to Pegasus and the Golden Crystal. We were also supposed to see the forest of Elysium fully revived, and in it, the Amazon Trio. During the ending scene, Chibiusa was supposed to stay stubborn until Pegasus finally flew away. Then she was to run after him, shouting his name. VesVes, watching this happen and feeling sympathy, then created a magical bridge to the sky for Chibiusa to run up, giving her the chance to tell Pegasus her true feelings.
Click to expand...
I like to see that instead of what we got.


So we were likely supposed to see the Eternal fuku(identical to the one in Eternal) for all soldiers in Sailor Stars after Usagi upgrades to ESM and likely the Sailor Quartet were supposed to be in Sailor Stars.
Last edited: Feb 20, 2021
Likes: FloraKiraraHime and SILVER
K

MementoNepenthe said:
SuperS Movie: Pluto was supposed to use "Chronos Typhoon." The working title was "The Pied Piper of Torte Castle."

Episode 168: Usagi and Mamoru's date scene at the beginning was supposed to revolve around Usagi wanting to get ice cream.

Episode 170: Mercury and Uranus were supposed to find themselves in ancient Incan ruins, but this was changed to Greek-style ruins during storyboarding. It seems the real Nehellenia was initially going to attack them.

Episode 171: Usagi was meant to awaken from her hallucination shouting, "There are no roses here!" In response, Nehellenia was to say, "If you want roses that much, I'll give them to you." Thus, the thorns that block the stairs to her palace were meant to be rose thorns.

Episode 172: It was at this point they decided to call the new season "Sailor Stars." Originally, they were going to re-show the scene of Nehellenia stealing her subjects' dream mirrors and turning them into Lemures, but during storyboarding, they came up with the idea of Nehellenia's lonely girlhood. Like in the TV picture book version, the mirror fragment in Mamoru's eye was supposed to be washed out by his tears. When the Sailors are speaking and sending energy to Usagi, Chibi Moon was originally going to say, "Pegasus said that Dead Moon was created by the darkness in everyone's hearts..." Then, after being healed by Eternal Sailor Moon, Nehellenia, now with the appearance of a pure queen, was to turn to Endymion and say, "I was dreaming. A long, long dream..." (The idea of Nehellenia turning back into a little girl happened during storyboarding.) We were supposed to see Luna, Diana, and Artemis at the end, but that was reduced to simply a voiceover.
Click to expand...
Another discarded idea from that part is the Eternal Fukus in the title page for Dream Arc act 48
Act 48: Dream 10 - Princess Dream – Miss Dream 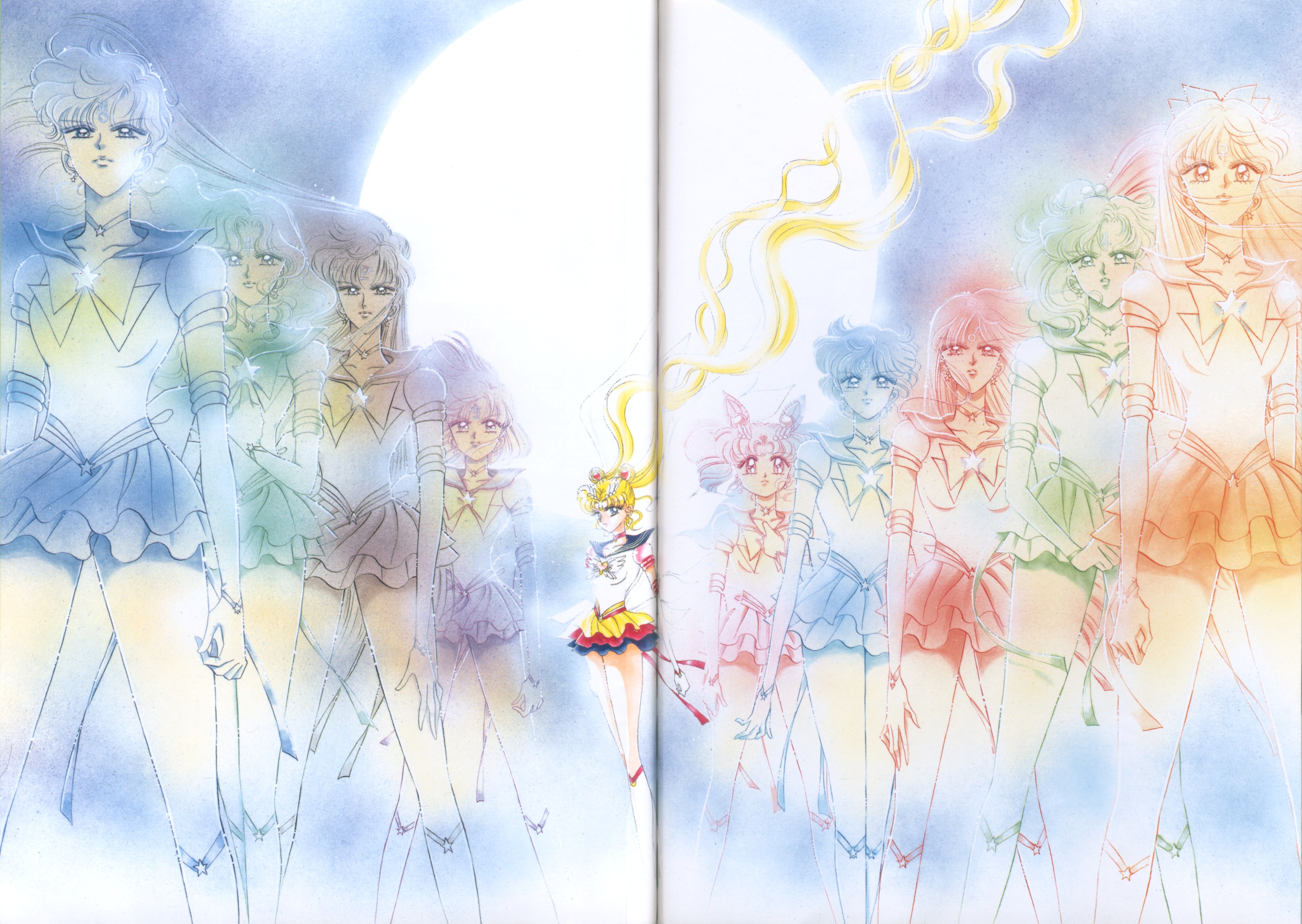 This is the quote from the fourth artbook

“The nine soldiers here are all drawn in ink of their respective colors. They were then thinly colored in marker. Sailor Moon’s lines are in .05 milli black pigment. In almost all the monochrome and color manuscripts, this .05 milli black pigment was used. The nine new costumes were certainly used in the anime
Click to expand...
Sailor Moon Original Picture Collection Vol. IV – Sailormusic.net
Last edited: Mar 4, 2021
Likes: Onuzim Ima and Crystal Moon

kasumigenx said:
I think that means that the role of Cosmos in the manga might have been originally planned to be similar to Princess Sailor Moon, meaning that PGSM might have used discarded plotlines from Stars, this also inspired the backstory of Galaxia in the anime I think.
Click to expand...
That’s not what it means at all... I feel like a lot of your claims are HUGE logical leaps and you repeat them in every thread.
Likes: ChampionOfNuggets, FloraKiraraHime, sapphire91 and 3 others
K

Seira Hazuki said:
That’s not what it means at all... I feel like a lot of your claims are HUGE logical leaps and you repeat them in every thread.
Click to expand...
I retracted my own post, sorry for exaggerating.


I was trying to say that the plans for the manga's plot changed from the original plans to the final one.
Last edited: Mar 4, 2021
K 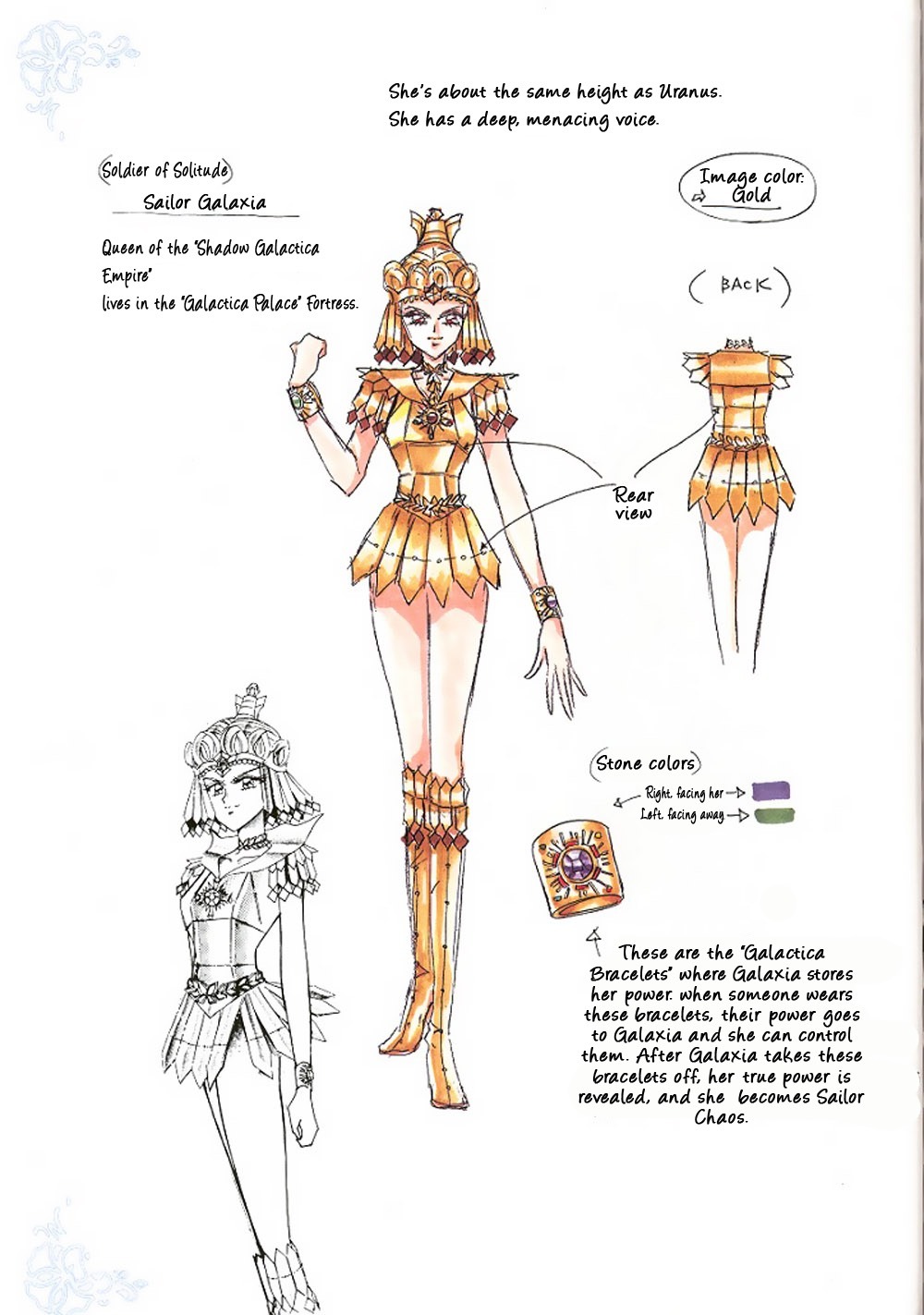 We know all that already. You don't need to keep repeating it.

MementoNepenthe said:
We know all that already. You don't need to keep repeating it.

I am sorry if I exaggerated.

I decided to retract and edit some posts because I do agree they seem to be repetitive.
K

I tend to think the Stars Manga might have looked less rushed if Naoko pushed through with the original pre-production plot of the Manga, but that is just an opinion of me.
K

I think Ikuhara changed the ending of Sailor Moon Super S so that the succeeding director won't be able to use his plans regarding Sailor Stars, it is understandable since seeing how TOEI treated him during Super S.
Last edited: Mar 12, 2021
K

I think Sailor Cosmos and the Eternal forms/upgrades of the Senshi have traces in the plot and animation of the 90s Sailor Stars anime in episode 172 and 190x, I think they were scrapped when they had decided on Galaxia’s backstory instead of sticking on her preproduction backstory (since those conflicts with her final backstory), which I think happened prior to episode 172, the same case happened to Dokidoki Precure, there are traces of the foreshadowing for Regina's original planned backstory.
Last edited: Mar 25, 2021
K

I think if they keep the Eternal outfits in the 90s version with the Change of Galaxia's backstory they would likely replace the Stars with the Hearts on the uniforms, that is just my opinion anyway
Likes: FloraKiraraHime

MementoNepenthe said:
Episode 45: The DD Girls' hallucinatory attack was originally to entice each of the girls into fantasy worlds, with a memory of Usagi being inserted right as they were on the verge of entering them. Later, Sailor Moon would be confronted by the last DD Girl while holding Rei's corpse, and defeat her with "Moon Tiara Action."
Click to expand...
I wish they went with the illusion concept, it both makes much more sense and has the added benefit of not having the Inners look stupid for always falling for the hostage traps.


MementoNepenthe said:
Episode 46: After regaining his memory, the fatally wounded Endymion was to say, "I'm no longer Endymion. I'm Mamoru Chiba, who lives in this era! I'm an ordinary college student whose heart was moved by a girl named Usagi Tsukino."
Click to expand...
I agree with everything Nadia said, this was a BIG mistake on the part of Toei not to include this line. Both Mamoru as a character and the UsaMamo ship feel so half-baked in the 90’s anime when compared to all the other versions that this would’ve done wonders for them.

First of all it actually sells us on the idea of the “Miracle Romance” by outright confirming Mamoru always had feelings for Usagi herself all along and debunking the long-time myth he was only with her because of destiny in the 90’s anime.

Second it gives much needed closure to Mamoru’s identity issues/crisis and makes him feel like he actually had a character arc and completed it, instead of just leaving it on an open-ended note and never revisiting again, which made Mamoru’s entire character development in the 90’s anime feel half-baked to non-existent. (Though it might be all for naught considering that we know in the future Mamoru does assume the Endymion identity permanently) I also like the nice little parallel it has with Usagi’s typical episode introduction since this is also the episode Usagi learns to appreciate her life as an ordinary girl and wishes to go back to those days without all that past life business getting in the way, also again paralleling Queen Serenity’s wish on how she praying they’d start anew and have normal, happy lives as ordinary people, very nice little touch!
Likes: kasumigenx and MementoNepenthe
You must log in or register to reply here.
Share: Facebook Twitter Reddit Pinterest Tumblr WhatsApp Email Link