Kerochan no Miko said:
Very beginning of the manga, page 12 in the Kodansha release. Usagi and her friends were talking about jewelry store robberies and Umino says Sailor V caught the robbers, to which Usagi replies, "Who's that?"
Click to expand...
Oh thanks for the clarification Kero Chan is this the same in Crystal.
.

(Crystal art errors would be a much bigger thread, though, alas.)
Is it Thursday yet?

I wish that, as a faithful adaptation of the manga, Crystal would also feature Uranus' insect arm.

Again, technically not an art error, but it kills me that in Act 56 when Eternal Sailor Moon tells Sailor Lethe to kill her, Naoko included a "reaction shot" of the Starlights' unconscious bodies Whether or not this is an error may be debatable, but I've always thought the picture of Rei's mom in "Casablanca Memories" looks really bad. She looks like Mamoru with hair extensions and her neck is unnaturally long MementoNepenthe said:
Whether or not this is an error may be debatable, but I've always thought the picture of Rei's mom in "Casablanca Memories" looks really bad. She looks like Mamoru with hair extensions and her neck is unnaturally long

MementoNepenthe said:
Whether or not this is an error may be debatable, but I've always thought the picture of Rei's mom in "Casablanca Memories" looks really bad. She looks like Mamoru with hair extensions and her neck is unnaturally long

Click to expand...
Just gonna act as more fuel for the fire to the "Mamoru is Setsuna in drag" theory.

This flashback shot of Queen Serenity from Act 13 is strange to me: It looks like her hair is down/loose instead of in two pigtails, and why is she wearing a ring all of a sudden?
Sailor Moon Says #BLACKLIVESMATTER #TRANSLIVESMATTER #GOVEGAN #WEARAMASK It looks like poor Tuxedo Mask is missing a chunk of his head. Mars's legs do not look right. Why? Just...why? What is the point of there being some sensor pebble in Ami's laptop that pops out? The screen couldn't have just flashed a down arrow? This is just the weirdest, most needlessly fussy thing in this chapter.
Sailor Moon Says #BLACKLIVESMATTER #TRANSLIVESMATTER #GOVEGAN #WEARAMASK

Jupiter's legs are poorly drawn in the fourth volume of the 2004 reprint. It also looks like she's going commando...
Likes: Starlight

The inners and the entire panel looks so flat. Also Luna's body looks off aswell 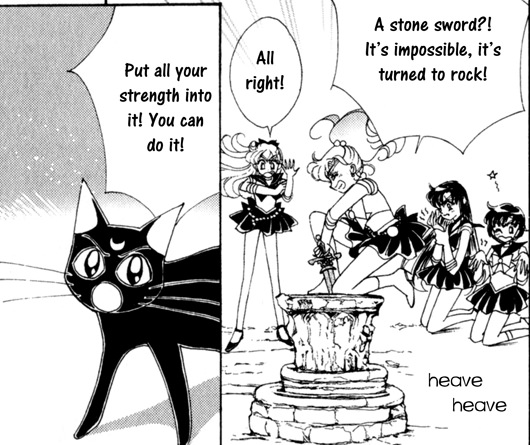 It looks like poor Tuxedo Mask is missing a chunk of his head.
Click to expand...
That upper part of his head is just hidden in an adjacent dimension under his magician's hat.

This technically isn't a manga art error, but...

The April 1996 edition of Nakayoshi features the results of the character poll for the Dream arc, revealing where the characters ranked in terms of reader popularity. Coming in at #9 was PallaPalla:

Posted this in my "Sailor Crescent Moon" thread but I figured I'd post it here, too: Naoko failed to update the Moon Stick's design for Act 48. (Unless this was intentional and there are two Moon Sticks.)
Sailor Moon Says #BLACKLIVESMATTER #TRANSLIVESMATTER #GOVEGAN #WEARAMASK

SailorSugababe said:
Act 2. I really dont think it looks right, like her neck could do that. 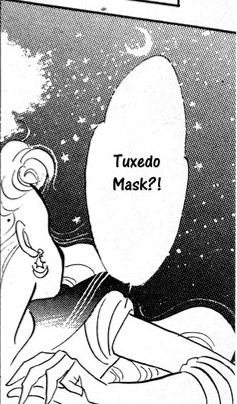 Click to expand...
Poor Venus suffered a broken neck too in Act 11: Their hands, skirts, even Ami's body looks bad, even unprofessional which is weird because Naoko did tons of redrawings, mostly for the first 2 arcs and yet this got through.

It doesnt look like this was supposed to look funny or SD either.
Likes: Starlight

^ The bubble of Moon should've read, "what happens to my hands?!"

Guys shouldn't there be differencee between actual errors and personal preferencess? The threads is for errors like wrong stick or brooch and not ugly or not to my taste panels, right? Most if the styff posted are not technically errors.

Click to expand...
Actually, the page preceding this one has an error as well. Really, the entire scene seems a bit confused:

It all begins when Evil!Mamoru hypnotizes Makoto. Hypnotized!Makoto then lures the other girls to their secret control room underneath Crown Arcade. Usagi takes off her Silver Crystal pendant to show Makoto that it's safe. Makoto reaches out to grab it, but Minako, sensing Makoto has been possessed, drop kicks her. Since Makoto did not grab the Silver Crystal, Usagi is still holding it.

Minako tells everyone to transform, but we only see her do so (even though group transformations are customarily shown; in fact, Sailor Mercury doesn't appear until seven pages later, then only in a single panel, and Sailor Mars doesn't appear at all, so the chapter basically becomes the Moon and Venus show at this point). Hypnotized!Motoki then lunges at Usagi to grab the Silver Crystal from her. (Actually, it's not clear based on the panel art if he's lunging at her to get the crystal, or if he's blasting her with an energy attack.) Venus again intervenes by attacking Motoki with a "Sailor V Kick" followed by a "Venus Love-Me Chain." We see Venus clearly holding her Venus Chain / Whip of Love with both hands in the first panel of the aforementioned page. In the next panel, she's suddenly holding the Silver Crystal. (When did she take it from Usagi?) Then, at the bottom of the page, she is again holding her Whip with both hands, no Silver Crystal pendant chain in sight. First it was her gloves, now it's the Silver Crystal... Why can't Minako keep track of her stuff?