If a crossover between Sailor Moon 90's anime and Sailor moon Manga/Crystal (post Stars) were to ever happen, how you think the characters would interact with their doubles and what would you like to see happen? 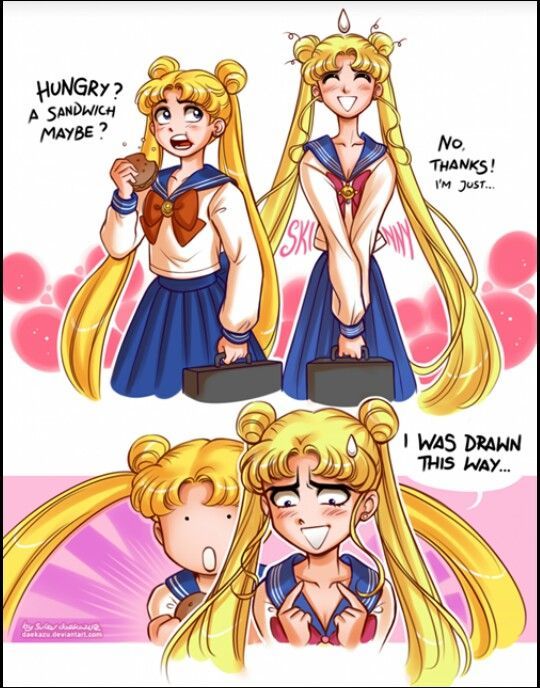 I don’t want it
Likes: ChibiBoi

SILVER said:
I don’t want it
Click to expand...
Why not the premise sounds interesting?
Likes: FloraKiraraHime

ChibiNehellenia said:
Why not the premise sounds interesting?
Click to expand...
It really doesn't to me. There just aren't that many differences between the two series to really justify alternate realities. Crystal Tokyo and present day work because of the big time gap and age gap, changes in role that Usagi has as queen versus a Sailor Senshi.
If I were forced to do anything of the sort, it'd be something akin Another Story where the present day senshi travel to the silver millennium somehow (Pluto?), yet I'd still rather keep in within one continuity and not mix two.

I also think that picture posted is problematic but thats not OP's fault.

I can see it being like Turtles Forever, with the 90's anime versions being flattened into complete caricatures and the manga/Crystal versions fleshed out since it would be from their POV. All of the 90's Inners would fire off weak attacks to let 90's Sailor Moon beat the bad guy, only for the manga versions of the characters comment how limited and one-dimensional they are. Specific character notes follow:

hasn't met her version of Ryo yet.

I would love to see Princess Psychotic PGSM

and destroy everyone just like what Kamen Rider Decade did then have her redemption arc.
Getting back to business.

Guardian Princess Nadia said:
I can see Crystal Sailor Mars look at her old anime self in disgust. By contrast, 90's Sailor Mars would look up to her manga counterpart, thinking them so much "alike" (and being horribly wrong).
Click to expand...
Oh GOD! I can totally see this happening.

ChibiNehellenia said:
Oh GOD! I can totally see this happening.

...Your kidding right? There are MASSIVE differences between the 90's anime and the manga/Crystal series.

Click to expand...
im not kidding. There are differences, but the plots all tend to play out the same way in the end save for minor differences (Pluto’s sacrifice, Serenity defeating Beryl, Black Moon’s largely the same). There are character differences too, but aside from Reí the main cast is largely the same too and the comments that speak of the art style being the most notable change between them speak volumes.
For example, I think that if Crystal shared the same plot with PGSM that it’d be a much better option:
*Chibiusa doesn’t exist in PGSM, so adding Usagi and Mamoru’s daughter in and playing off Sailor Luna would be interesting
*Princess Serenity from PGSM is much different than Classic’s or Crystal so the interaction between both and/or the characters could bring something new
*Saturn, Neptune, Pluto and Uranus haven’t been in that world so they’d bring something fresh to it
*Venus from PGSM either working with the Outer Senshi (as she shares qualities of theirs) and being shocked at how carefree and reckless Venus from the manga/classic anime is would be hilarious

Ami in the manga is somewhat aromatic and antisocial, but her anime counterpart social and open to romance in one episode she confesses to Shingo, who has a crush on her, an interest in marriage and children. Has a few friends outside of the Guardians, Ryo, Kunitachi the park's caretaker, from episode 15, and Natsumi the widow who Ami help fixed up her car. Anime!Ami is also Not So Above It All as tv tropes would say and is a bit pervert (the scene where, when they see Seiya wearing only a towel, and Chibi-Chibi is pulling on the towel trying to take it off she can be seen peeking through her hands.

Minako in the anime never ended up killing up her love interest and as such she doesn't believe she's cursed to never find love also she's is just as ditzy as Usagi if not more so. And there also Sailor Uranus and Neptune who in the anime at first weren't very nice to anyone.
Last edited: Feb 13, 2020
Likes: Sailor Starlight, Onuzim Ima and Neo Queen Serenity

Crossover Time!
1. Two Death Phantoms could spell doom for an entire multiverse if they decide to work together or the two would try to kill each other with the one left standing becoming the most powerful.
2. 90's Professor Tomoe would be horrified when he discovers how depraved his Crystal counterpart is, while the Germatoid symbiote would be delighted. Expect 90's Germatoid to bond with Crystal Germy at some point.
3. Two Tuxedo Masks fighting together would be something. Things get interesting when 90's Tux discovers he might not be utilizing his full potential when he witnesses Crystal Tux using the Tuxedo La Smoking Bomber and other Golden Crystal-related abilities.
4. Two Sailor Saturns = two times the world-destroying power. Just in time to stop Merged Pharaoh 90.
Last edited: Feb 21, 2020
Toorisugari no Slider da. Oboetoke!

I am the destroyer of worlds. Anything I touch will be destroyed
...or turned into a card.
http://i32.tinypic.com/315csia.jpg

You know I just now realize something about the Imperium Silver Crystal is that in the 90's anime a lot less of the big bads were after the thing for them to have.

I headcanon that the reason why less people were after it in the anime was because in the anime the Imperium Silver Crystal has been known to kill users of it if their not careful enough with it.

This is interesting because in the manga Usagi kinda believe that if it wasn't for Silver Crystal people always be fighting over it, starting wars, but as the anime shows that is simply not the case people will fight over things Silver Crystal or not.
Likes: Sailor Starlight

SILVER said:
Naru and Umino aren’t a thing in this continuity though...
Click to expand...
I wonder how the Manga/Crystal versions reactions would be if they found out their 90's anime counterparts were dating one another?
Likes: SILVER

ChibiNehellenia said:
I wonder how the Manga/Crystal versions reactions would be if they found out their 90's anime counterparts were dating one another?
Click to expand...
Naru would definitely be horrified, though Umino would be thrilled about getting with a pretty and smart girl like her!
Likes: ChibiNehellenia

SILVER said:
Naru would definitely be horrified, though Umino would be thrilled about getting with a pretty and smart girl like her!
Click to expand...
Fun fact Unimo in the 90's anime has a giant photo of her counterpart above his bed.

I believe 90's Naru is aware about the photo and finds it flattering.

SILVER said:
*Princess Serenity from PGSM is much different than Classic’s or Crystal so the interaction between both and/or the characters could bring something new
Click to expand...
You can even make her the big bad of a crossover between Manga/Crystal, PGSM, and the 90's anime because Princess Sailor Moon is that dangerous and insane.
You must log in or register to reply here.
Share: Facebook Twitter Reddit Pinterest Tumblr WhatsApp Email Link