In the manga we only see Usagi transform into Eternal Sailor Moon (via calling out her transformation phrase "on screen") three times - in Stars 1, Stars 2, and Stars 5.

Here are these scenes from the original serialized run in Nakayoshi:

Now, the dropping of the "Power" is curious enough in itself, but just as curious is Naoko's suddenly switching from using the standard katakana approximation of makeup (メイクアップ meikuappu), which, from what I can tell, is what she'd always used before, to this new approximation (メイク・アッップ). Since she repeats this rendering in Stars 5 and did not correct it in any of the compilation releases, it doesn't seem to be an error.

It's also not the only example of orthographic oddities in Stars. Also taken from the original serialized run in Nakayoshi: In the page showing the Sailor Starlights calling out their transformation phrases in Stars 2, we see that Naoko uses the standard katakana rendering of makeup (メイクアップ). (In fact, if I'm not mistaken, she only uses her weird alternate rendering with the double sokuon for Eternal Sailor Moon's transformation phrases). However, the "Power" part of their transformation phrases are written with a seemingly superfluous sokuon, as: パワーッ. Similarly, when Mars and Venus call out their "Crystal Power" transformation phrases in Stars 3, two seemingly superfluous sokuons are added to the end of the "Power" part, as: パワーッッ. Can someone explain these orthographic oddities? Might there be some stylistic rationale behind Naoko suddenly adding all these extra sokuons everywhere? Or do you think she (and her editors) just got super tired during the Stars arc and forgot how to spell?

(And, while we're on the subject of Mars's, Venus's, and everyone else's transformation phrases, how lame is it they didn't get new ones given they got new uniforms? They didn't even get new powers. Jeez. No new transformation phrases, no new attacks, and all forced to wear identical, albeit color-coded, uniforms with ugly bubble sleeves, only to be quickly and unceremoniously dispatched by Galaxia and her minions? Naoko must have really hated the Inners and Outers by the end of the manga's run to do them so dirty!)

Anyway, back to Eternal Sailor Moon.

From the tankoubon release: Here we see that, for the original compilation release of the manga, Naoko completely changed Eternal Sailor Moon's transformation phrase in Stars 1 (along with drawing a completely new page to go with it), to "シルバー・ムーン・クリスタル・パワー・メイク・アップ!!" ("Silver Moon Crystal Power Make-Up!!"). In Stars 2 and Stars 5, the double sokuon rendering of "Make-Up" returns ("シルバー・ムーン・クリスタル・パワー・メイク・アッップ!!"), so Naoko seems pretty married to that little oddity for some reason.

But also beyond me is what Naoko did for the revised edition and re-revised/perfect/eternal edition releases: So... What gives? What's up with the constant changes back and forth with Eternal Sailor Moon's transformation phrase? What's up with all the orthographic oddities with superfluous sokuons and appearing and disappearing interpuncts? Could there be any artistic explanation, or is it just sloppy editing madness?

In any case... I never want to see a diehard manga fan criticize the original English dub for its inconsistent attack and transformation phrases ever again.
Sailor Moon Says #BLACKLIVESMATTER #TRANSLIVESMATTER #GOVEGAN #FREEPALESTINE

MementoNepenthe said:
and all forced to wear identical, albeit color-coded, uniforms with ugly bubble sleeves
Click to expand...
The reason their "Eternal" uniforms are identical is because Naoko was strongly influenced by Supere Sentai growing up. These series had all the heroes wear the exact same uniform, therefore she drew the Sailor team's "Eternal" forms (minus Moon) to symbolize their complete unity. They were united in their goal of protecting the Solar System together. It isn't my favorite form, though I understand the reasoning behind it.
Last edited: Feb 24, 2021
"Dreams are hopeless aspirations in hopes of coming true, believe in yourself, the rest is up to me and you"
July is Chibi Chibi Month!

Likes: The Blizzard Prince and SILVER

All of them wearing the same boots is horrible. I'm so glad the anime never did this.

FloraKiraraHime said:
This is exactly how I feel! I dislike those identical uniforms, too! Why did Naoko get rid of Mars' high heels?! I loved the heels.
Click to expand...
I miss all the individual accents they had in the first manga arc, like Venus' belt and Mars' waist brooch and such. They still had recognizably the same uniform but they got to be individuals.
Is it Thursday yet?
Likes: The Blizzard Prince and FloraKiraraHime

Kerochan no Miko said:
I miss all the individual accents they had in the first manga arc, like Venus' belt and Mars' waist brooch and such. They still had recognizably the same uniform but they got to be individuals.
Click to expand...
Yeah those are nice too.

I don't know her reasoning for it, but "Silver Moon Crystal Power, Make up!" is a ridiculous mouthful that should have been shot down by someone.
And the identical eternal outfits are something I'm gonna be fearing when Crystal gets to them. Moon and Chibimoon are the only ones that pull them off, in my opinion.

Also, it feels like Naoko couldn't care less about anyone who wasn't Usagi, Mamoru, or occasionally Chibiusa by the end of the series.

And I don't think the Eternal uniforms are that bad...it's really just the horrible gumball sleeves that ruin them. The Sailor Quartet's Eternal uniforms have regular sleeves in that color illustration of them with Chibi Moon and Saturn and I think they look kind of nice like that. (Though it does irk me that the Sailor Quartet start out at Eternal-level.)
Sailor Moon Says #BLACKLIVESMATTER #TRANSLIVESMATTER #GOVEGAN #FREEPALESTINE

Click to expand...
Or just not say anything at all then have people think it's because Kotono can't pronounce it correctly like with Moon Twilight Flash.

NJ_ said:
Or just not say anything at all then have people think it's because Kotono can't pronounce it correctly like with Moon Twilight Flash.

Click to expand...
.....is that seriously why they left it out
Is it Thursday yet?

Kerochan no Miko said:
.....is that seriously why they left it out
Click to expand...
Nobody knows why but that's what some had thought when Act 4 premiered.....not knowing that she did previously say it for the arcade beat em up game.

@onesurvive Yep, I espiecially dislike Mars in those boots, as I stated in my above post.
@Seen2 I'm fearing that too! I agree that only Moon and Chibi Moon are the only ones who pull off the Eternal seifuku well. The others, not at all! One issue I have with Chibi Moon's Eternal uniform is the star motif. Isn't she a Moon Senshi like her mom was?
"Dreams are hopeless aspirations in hopes of coming true, believe in yourself, the rest is up to me and you"
July is Chibi Chibi Month!

That's interesting I never knew that in the original release on Nakayoshi, Sailor Moon used "Moon Eternal [Power], Make up". Now I guess i know why the anime used this transformation phrase.

From what I know from my original manga she do use "Silver Moon Crystal Power, Make up" each time to transform. Same for the re-release etc excepted in the first chapter where she used "Moon Eternal, Make up".

I guess Naoko was not happy with the original one on Nakayoshi:, decided to used "Silver Moon Crystal Power, Make up" instead for the first official release (Sailor Moon on "Nakayoshi" as to be seen like a draft of the original version I guess...i read in the past that Naoko always improve some drawings etc for the "official" first manga release").

And decided finally to re-use "Moon Eternal, Make up" for the first chapter (and only) of the re-release and newer of the manga as a nod to the old anime (as she did in the first Arc "Dark Kingdom" of the re-release and newer v. of the manga with PGSM : jupiter's belt, attack phrases for Jupiter, Mercury, Moon...).
Au nom de la Lune, Je vais te PUNIR !
Likes: FloraKiraraHime

It doesn't make sense that she would go back to "Moon Eternal, Make-Up!!" for just Stars 1 (and thus introducing an inconsistency) as a nod to the old anime. If she wanted to bring the manga into closer alignment with the anime, why not use "Moon Eternal, Make-Up!!" for all three transformations? Why not change "Sailor Chibi Chibi" to "Sailor Chibi Chibi Moon" and "Silver Moon Crystal Power Therapy Kiss" to "Silver Moon Crystal Power Kiss"? It doesn't make sense to me.

MementoNepenthe said:
It doesn't make sense that she would go back to "Moon Eternal, Make-Up!!" for just Stars 1 (and thus introducing an inconsistency) as a nod to the old anime.
Click to expand...
Well it make maybe no sense to you but as she never said a word about it you’ll not be able to find any explanation. I really do think it’s a nod to the old anime, maybe she just found the formula good and wanted to keep it for one chapter. Or maybe this is just a mistake.
We’ll probably never know

. But ask her if you see her around

As for the rest of your interesting comments, I’m not speaking Japanese so I hope someone here can explain us (I’m pretty sure it’s a stylistic stuff but...)
Last edited: Mar 11, 2018
Au nom de la Lune, Je vais te PUNIR !
Likes: Stari Guestie 39

Naoko needs to get on social media so we can inundate her with all our questions!

There are so many things I want to ask her about that I know I'll never end up getting answers for. Just another frustrating aspect of being a Moonie.

(I also wasn't trying to discount your theory, by the way. I think the change being a nod to the anime in some way is certainly a plausible explanation; it's just if that *is* the explanation, it's one that makes no sense to me. Not that it'd be the first nonsensical thing Naoko and the other powers that be have done re: Sailor Moon.

From doing a bit of research, it seems that sokuons are sometimes added to the end of words/sentences to indicate they've been cut off or to indicate anger or surprise, so perhaps the sokuons added onto the end of "Power!" in Mars's, Venus's, and the Starlights' transformation phrases is meant to add some kind of emotional emphasis? (If so, I wonder if it's something Naoko has done before. I'd have to go through the whole manga, and I don't really feel like doing that xD) But that doesn't really explain the double sokuons, which, as far as I can gather from Google, isn't a thing that's done? If it's just a 'typo,' it's a fairly common one in Stars, and I wonder why Naoko and her editors never caught it throughout four releases?
Sailor Moon Says #BLACKLIVESMATTER #TRANSLIVESMATTER #GOVEGAN #FREEPALESTINE

.
I do envoyed this topic by the way, I really have the feeling to know everything about everything since 20 years about the serie that it’s always very refreshing to discover something new

, here's a comparison of the transformation calls in the last Chibiusa Picture Diary side story: 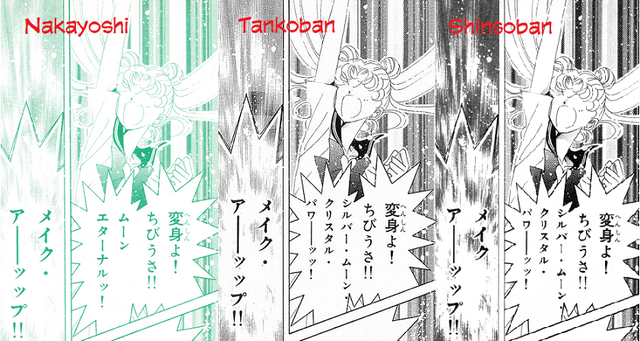 Kerochan no Miko said:
I miss all the individual accents they had in the first manga arc, like Venus' belt and Mars' waist brooch and such. They still had recognizably the same uniform but they got to be individuals.
Click to expand...
I like Venus and Jupiter's belts, they're lovely. I feel the need to mention Venus having a single line on Sailor Soldier uniform.
"Dreams are hopeless aspirations in hopes of coming true, believe in yourself, the rest is up to me and you"
July is Chibi Chibi Month!