Which Season had the best animation?

I really love the character designs and animation in the anime although there was obviously a lot of cheapness and cutting corners I still feel a lot of care went into this show, too.
I always hear that SuperS had the best animation and I feel that season is most deserving of that distinction.

SuperS. Classic was pretty basic. R and S felt like minimal improvemente. Sailor Stars felt like a drop down from SuperS.

Like that Defense of SuperS essay said its animation and soundtrack are probably its best strengths
Likes: BillyKonstantine

"Dreams are hopeless aspirations in hopes of coming true, believe in yourself, the rest is up to me and you"
July is Chibi Chibi Month!

I think it was Stars, simply because Masahiro Ando only ruined one episode with his awful design.

In my opinion the latter 3 seasons, particularly Stars and S to me, had the best in terms of art and animation (with some exceptions), SuperS was great looking too. I like Classic and R's art design/animation too, but those weren't as good looking and you can see animation shortcuts (Beryl around her crystal ball a lot) in the first few episodes, but it still has a charm to it and to be fair, it was still starting out.

I have always considered SuperS to be the one season in which they started cutting corners. While it has very gorgeous stock footage and very pretty designs, it had more episodes done by the considered b team animator team lead by Ando. Also way more relying on stock footage, including for the villains. The average animation in Sailor Moon as a whole is standart for a long running show at the time, so if you take into account that weaker animators taking more episodes as well as more stock foorage than ever, I assumed it cost cheaper than some of the other seasons.

The season that came out in 2003-2004. The animation is so incredible, you'd swear you were watching real people.


Seriously though. I'd agree that SuperS has the best animation, followed by S, then R, then Classic, then Stars.
#BLACKLIVESMATTER

Definitely SuperS, Classic/R/S are all pretty good with minor improvements as they go along- Stars is horrific, though. The animation is mostly alright but some of the art is just horrible, I'm not versed on all of the animators and Character Designers but Stars had so many episode (especially the finale episodes) where everyone looked so ugly.

Hugging R2D2 in a galaxy far, far away

MementoNepenthe said:
The season that came out in 2003-2004. The animation is so incredible, you'd swear you were watching real people.

Click to expand...
Did we have Clown Cerial for Breakfast again? Tip: If something tastes funny, it's usally a Warning sign.

No question. Super S and S wins. I'm so sad that Super S had bad story, while they had gorgeous art styles of Ikuko Ito (And probably the last season she did with Sailor Moon

). S was also cool. Butterflies, shimmerings, Moon Cosmic Makeup (best transformation of Sailor Moon), Mistress 9, Neptune.... Even story is much better than in Manga. I am actually sad about the attacks in Stars weren't awesome and epic like Moon Gorgeous Meditation or Spiral Heart Attack.

Plus, I'm excited and curious about how the new Crystal film will do with Moon Gorgeous Meditation, since SuperS made it so epic.

I have a hard time actually deciding this because there are so many episodes.

That said, I'm... less than convinced SuperS is the pinnacle of non-cheapness and quality artwork. Episode 131 springs to mind as one example: 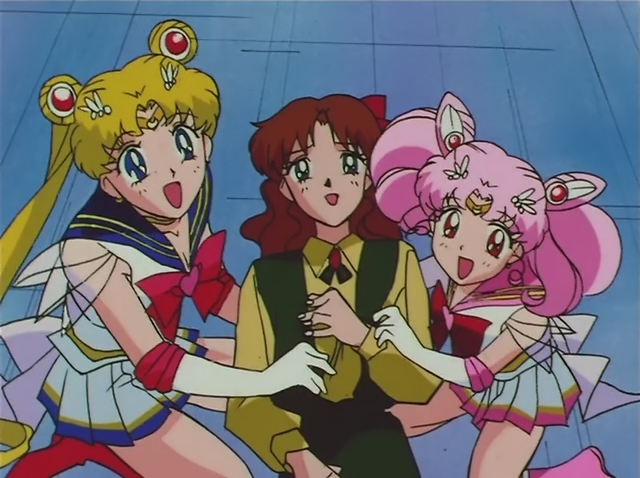 Also, the sheer amount of the stock footage seemed a little bit higher because we always saw Twinkle Yell, then Moon Gorgeous meditation, and then the overly simplistic flashing screen of the Lemures making a funny face and glass-cracking for the "stage out" bit. The monster killing seemed to go on forever and was horribly boring to look at. Contrast that with the dust pile melting type effects you'd get for Youmas in season 1. Plus, I have to agree that there were a lot of "B Team" looking episodes.

Of course, no season is immune to bad days. I may love episode 26 to pieces, but that doesn't stop it from looking a bit terrible (especially when contrasted with it's clips from the much-better-animated episode 24). When they managed to make Zoisite ugly, you know you're really in trouble: 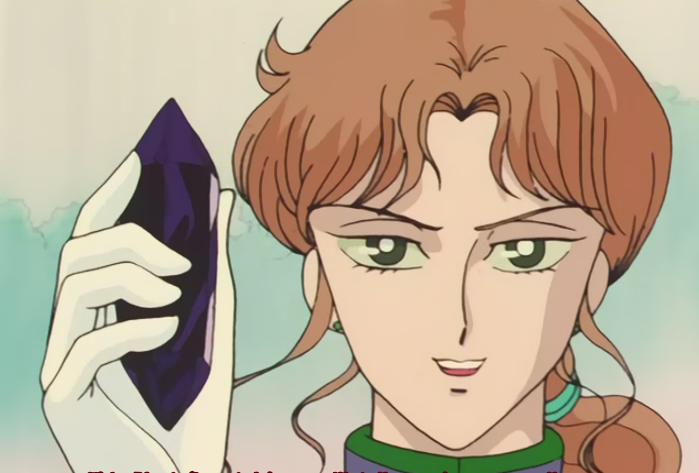 But yeah, I do think that SuperS tended to look overall worse than earlier seasons, not better. Stars had higher highs and lower lows (like the arcade tournament episode with the cosplay). However, SuperS did look great at times, such as key moments like the Trio fighting Mister Magic Pierrot, or various funny scenes with the Quartet, the age reversal episode, and so on. Also, Stars' intro sequence looked amazing.

For best animation, I think I'm inclined to say season 1, although S gave it a really good shot (except for the last episode of the season... felt like they threw in an extra epilogue after they already made the finale, in a few ways. Then again, R literally did that with it's stock footage preview episode, so maybe that's why).

Tuxedo Kevin said:
Character design:
Click to expand...
If we're talking about the way in which characters are drawn, then I also prefer the more circular faces on the girls and Luna in season 1; I'd rather things be simplistic and rounded, rather than pointy and wobbly and weird the way the later animation tended to go. The best animated episodes look downright amazing (24, 45, 46), the mediocre ones look okay (which is true of most of the show), and even the worst, like 26, have cute and good frames going on... I can't single out a particular Season 1 episode where the whole thing looks bad (although episode 28 is another dishonorable mention).

If we're talking about liking the designs for new characters by season, then season 1 still wins with me, not only for the villains but for all the main character designs that endure into other seasons (plus all the side characters who endured the first four seasons, and Ryo Urawa and the other great youma / human form designs). I feel like the ideas for character designs got a bit more out-there and wacky later on, resulting in things that I can respect for being more creative (the Shitennou are just a bunch of pretty guys in mostly-traditional military uniforms; the Amazon Trio are wearing outlandish and striking fashion), but often a little ugly (with some notable exceptions, like Sailor Iron Mouse). Though, I do love the designs for Ali and En and their human forms.

However, character designs usually can't be attributed to the anime seasons much at all, since Naoko Takeuchi designed most of the characters for the manga first. The anime tweaked these designs for their own purposes, removing bits that would take too long to draw (like Sailor Venus' chain belt) or refining face designs or tweaking hair color (Kunzite's hair is more of a mint color in the anime) or things like that, but they only created designs for new characters like Yuuichirou, Ali and En, the Moonlight Knight design, and so on. Also, they redesigned Professor Tomoe to contain 8000% as much awesomoleum. Maybe S had the best animation at times?!

But yeah, I'm incredibly biased in favor of season 1 for a lot of reasons, but I do legitimately like it's visual style the most, on top of all the other reasons. That second intro sequence, with Tuxedo Mask on a horse, is also one of the best-looking in the series.

It's all pretty subjective personal preference stuff though, and it's a close call in my opinion. The whole show looks good, but also riddled with off days of B-Team quality.

I find Stars to be better animated. SuperS has these really strange proportions. And these are usually one frame animations like that fake Pegasus episode. 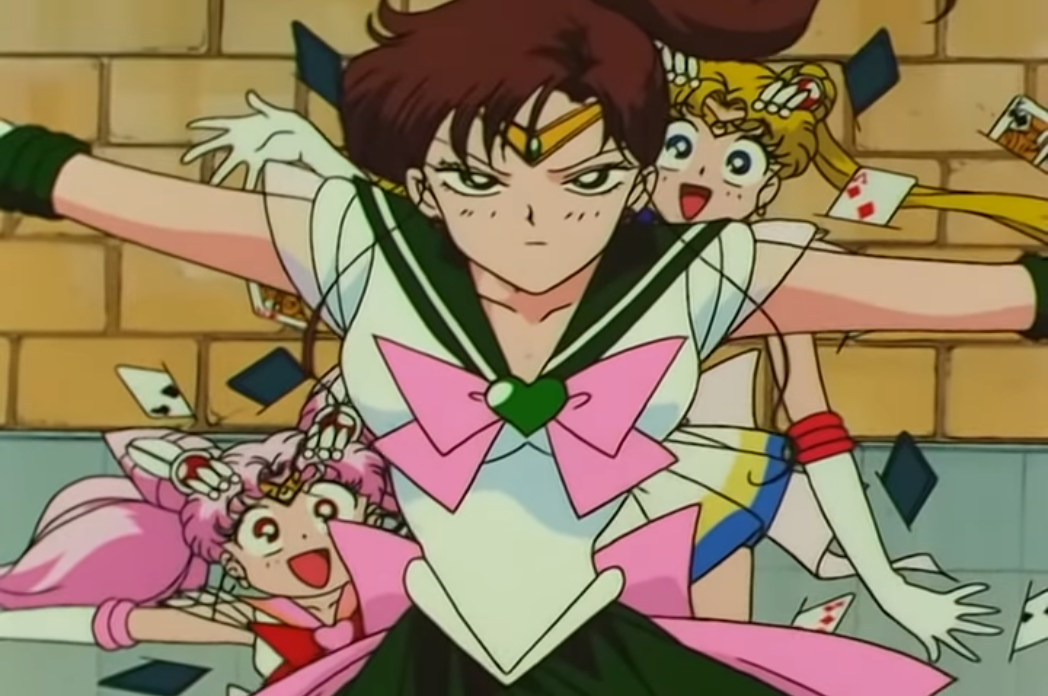 I actually love the animation on episode 191. It's kind of Rayearth-ish. 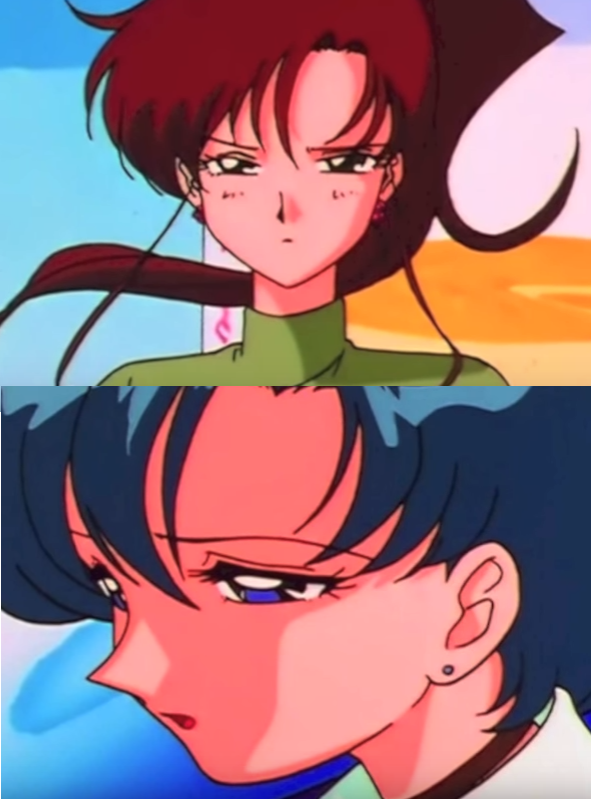 Getting back to business.

Creating new art and sharing it is quite an accomplishment.

rgveda99 said:
I actually love the animation on episode 191. It's kind of Rayearth-ish.

Click to expand...
Interestingly the guy who animated episode 191 later went on to work on Yu-Gi-Oh! Season Zero. The art was kinda a bit hit and miss there to me, but the animation was good, everything moved fine.

I found another "gem" Ando did: Mercury looks fine (I always like the way he drew Ami most of the time), but just look at Mars and Venus' faces...

Sailor Moon~ said:
I prefer the animation in the classic and Stars seasons the most
Click to expand...
Why Classic? Most of the animation is pretty ugly and choppy and cheap.

Not to the extremes of Crystal but I would honestly consider it the worst animated of the original 5 seasons. And I say that as someone whose favorite season is classic.
Likes: Tuxedo Kevin

Most of them feel about the same to me, but SuperS probably has the highest highs. Classic was more consistent, but its highs never reached that point.

Masahiro Ando's crazy designs were the first time I recognized how much of a difference an animation director can make. His episodes always stuck out like a sore thumb because the characters were always more cartoony-looking with huge eyes and rounder faces, along with shorter/stockier-looking limbs. It's really noticeable in the two-part "Birthday Blues" episodes, where he worked on episode 101, but not 102, which took place immediately after, and the character designs completely changed suddenly.
Likes: animenerd99 and Frenchfries&AChocolateMalt

SailorSpySedna said:
Mercury looks fine (I always like the way he drew Ami most of the time), but just look at Mars and Venus' faces...
Click to expand...

almost always looks cute, but some episodes or single scenes really stuck out to me in a positive way. ♥