Why didn't mamoru get his memory back his life with his parents who died?

It would have been nice to see that happen.

neptunekh said:
It would have been nice to see that happen.
Click to expand...
Because ultimately his memories of his present life don't really matter in the long-run.

See this is exactly what I mean when I say Sailor Moon is some fridge horror [BLEEP] and an attempt at a deconstruction. Mamoru's whole story alone is some depressing ass [BLEEP] and showcases just how meaningless their regular human/civilian identities really are.

I mean here we have this kid who probably lived out a perfectly normal existence until one day fate intervened and he got into his car crash that killed his parents and made him lose his memories. Now thanks to his head injury his normal human memories are getting all mixed up with his memories of his past life/Endymion and he's so confused and genuinely lost in the world. In the 90's anime it's even more horrifying because a lot of times his Tuxedo Mask self isn't even a conscious part of him and literally has a will of it's own! He just suddenly finds himself drawn to these strange small businesses all of a sudden with nary an explanation as to why and ends up finding himself blacked out in a coma with no memory of how he even got there in the first place more often than not.

That's some nightmare fuel right there!

Then once he finally learns about his past life as Endymion, which isn't even the past he was looking for it's like his human life and memories don't even matter anymore. He just easily slips into the role of Endymion/The Golden Crystal carrier/"Sailor Earth" with nary a thought.

It's honestly pretty terrifying if you really think about it, his entire self has now been consumed/taken over by Endymion.
Likes: SailorSpySedna and julayla
H

When you put it like that, there's a lot of horror in Sailor Moon indeed. Do you think that was intentional or it just worked out that way?

There's no reason to think that he doesn't get his memories back. We never see him explicitly getting them back but that doesn't mean he didn't. In the anime we see Hotaru get back her memories of her life with Professor Tomoe even though those aren't really necessary for her to have; in the manga we don't see that happening but she still recognizes Chibiusa later, so presumably she did get all her memories back. Who's to say the same didn't happen with Mamoru?
Lita 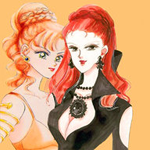 He was six at the time. There are seriously not much to be retained.
Last edited: Jul 14, 2019

Holzer said:
When you put it like that, there's a lot of horror in Sailor Moon indeed. Do you think that was intentional or it just worked out that way?
Click to expand...
I think Naoko definitely intended Sailor Moon to be horror-esque, or at least have horror elements, just look at some of her youma designs in the manga or that scream-inducing pic of Evil Endymion when Beryl brings him back from the dead all zombie like.

This goes back to why I say Sailor Moon is a deconstruction, it's obvious Naoko was trying to create a much darker and grim story then her editors would allow, if you read up about all her original plans you'd notice. I mean she was planning on making Ami a cyborg and even killing off everyone at the end indefinitely!