Yesterday I found the first volume of the Tokyopop Sailor Moon manga for a $1.25 at Savers. :love:
Credit to Prince Rose for the image.

some photo are blurry and some upside down, sorry! ç_ç I've also tried to take a picture of the different sides of the objects. There's a photo with one piece cards because i have made photo of my entire collections of Anime, Manga, gadgets and more for another forum (i haven't posted all my collection, i need to make some photo of my manga too, artbooks and magazines, i need to find time for do this

Here's a photo of a part of my SM doll collection, that I ripped from my Instagram! I'm a doll collector so that's usually where my interests go- I had a lot of these dolls as a kid (as well as the older American dolls- terrifying) and recently I decided I wanted to re-collect them and get the dolls I never had! The collection is almost complete; I still need Black Lady and Princess Serenity might get longer, lighter blonde hair (not sure about that one yet)! They've all had their hair styled by me- I'm a doll hair nut so they all had to have sleek, perfectly styled hair! Princess Serenity has a handmade dress from Etsy as the original one is made with an ugly fabric and I didn't like the design. This one isn't perfect either but the fabrics and silhouette are on point.

On the side you can see my Pluto and Super Moon Figuarts (I'm not much of a figurine collector but SSM and Sailor Pluto are two of my favorites so I needed them!) as well as a little Super Moon gashapon I got when I was a kid, and volumes 1 &2 of the manga (the rest are on the way)!

I also have two other displays dedicated to the Japanese dolls, but since it's still a WIP I don't want to post any photos until it's finished! I have like ten dolls I still need before those parts are completed

you have a great collection im jealous

I really loved the new wave of Irwin dolls. It's interesting how Sailor Moon, Super Sailor Moon, and Princess Serenity all have different eyes. I think Serenity has the most lovely eyes!

Ryo Urawa said:
you have a great collection im jealous

Umino said:
I really loved the new wave of Irwin dolls. It's interesting how Sailor Moon, Super Sailor Moon, and Princess Serenity all have different eyes. I think Serenity has the most lovely eyes!
Click to expand...
The Second wave (Black lady, Serenity and the Outers/ Super Moon) are some of my favorite SM dolls made! Serenity has a gorgeous eye screening, it's one of my favorites too! I love Super Moon's because they seem heavily influenced by the SuperS artwork (though they should have been bigger, Imo) and are more refined than the original Irwin 2001 Moon doll. It will always sadden me that Irwin didn't decide to re-release the Inner Senshi with updated faces! They obviously tried to replicate the faces on the Bandai Japan dolls from the R season-this is especially obvious in the prototype photos, shown on the back of the boxes of the first run of Irwin 2001 dolls (shown in the attachment), but they lost the vibrancy and larger eyes in the manufacturing process.

I think Irwin 2000/2001 gave us really accurate, refined dolls of the characters with (for the most part- it bothers me that the blue on Super Moon's skirt doesn't match the blue on her collar) accurate clothing and accessories with more 'serious', perfect replicas of the eyes in the second wave. Pluto is another favorite of mine, even though I dislike the wrong skintone and the presence of sleeves (which is one of my favorite things about Pluto's fuku- the lack of sleeves)!

I have plans to eventually acquire the Pullip Super Sailor Moon specifically for her brooches, so that I can replace the ones on my Irwin Super Moon doll- sounds ridiculous to pay 140$ for doll brooches but I'm a perfectionist lol. Hopefully I'll find the outfit separately since I don't actually like Pullip dolls.

My Sailor Moon collection is well.... too small.
I just have some manga and a CD.

My collection consists of
Sailor Venus S.H.Figuart
SM Manga vol. 1 - 3
Sailor V Manga both volumes
The manga I have it's the Kodansha 2011 version and I ordered it online(anime & manga aren't very popular where i live...)
J

Wow, you guys are so lucky. I use to have lots of Sailor Moon stuff, but I lost most of them when I kept moving from home to home. Now all I got left are my Sailor Moon plushes (from the DIC era from the Inners, Moon, Chibi/Mini Moon, Pluto, and Saturn), necklace, my manga (the Tokyopop & Kondansha collections), the Sailor V manga (Kondansha) and a few of the western Sailor Moon novels that go from the first episode to the final episode with Nephrite. My old toy Moon wands sadly broke to pieces when the boxes they were in fell and shattered. I'm trying extremely hard to rebuild up my Sailor Moon collection, but the new items I see get more expensive and sadly, I can never find them in my hometown, which is a church town AND more like a desert town

Everyone has amaizing collections. 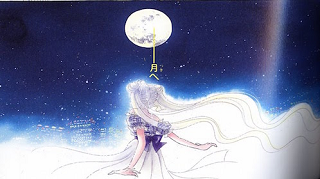 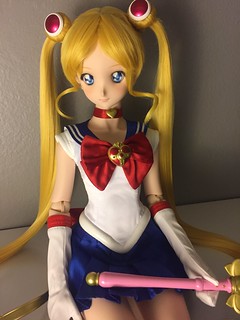 I got this gorgeous doll in the mail this week! I'm absolutely in love with her, but she also broke my bank so I have to put a hold on getting the last two Bandai Japan dolls I need for my collection for a little bit LOL. I was previously disappointed with the Volks Dollfie Dream Sailor Moon, but after I saw IRL photos from people that got her at Dolls Party, I flipped all the way around and needed her.

This year I bought Petite Chara figurines of Sailor Moon and the Inner Senshi (doing their transformation poses) with Tuxedo Mask, Artemis, and Luna; and the Dark Kingdom set, which includes Princess Serenity, Prince Endymion, Jadeite, Nephrite, Zosiite, Kunzite, and Queen Beryl. However, in hindsight I think they might be bootlegs? But oh well. On the bright side they were cheap enough that I was able to afford it. Anyway, then I bought this rare little thing I found only one of on ebay: 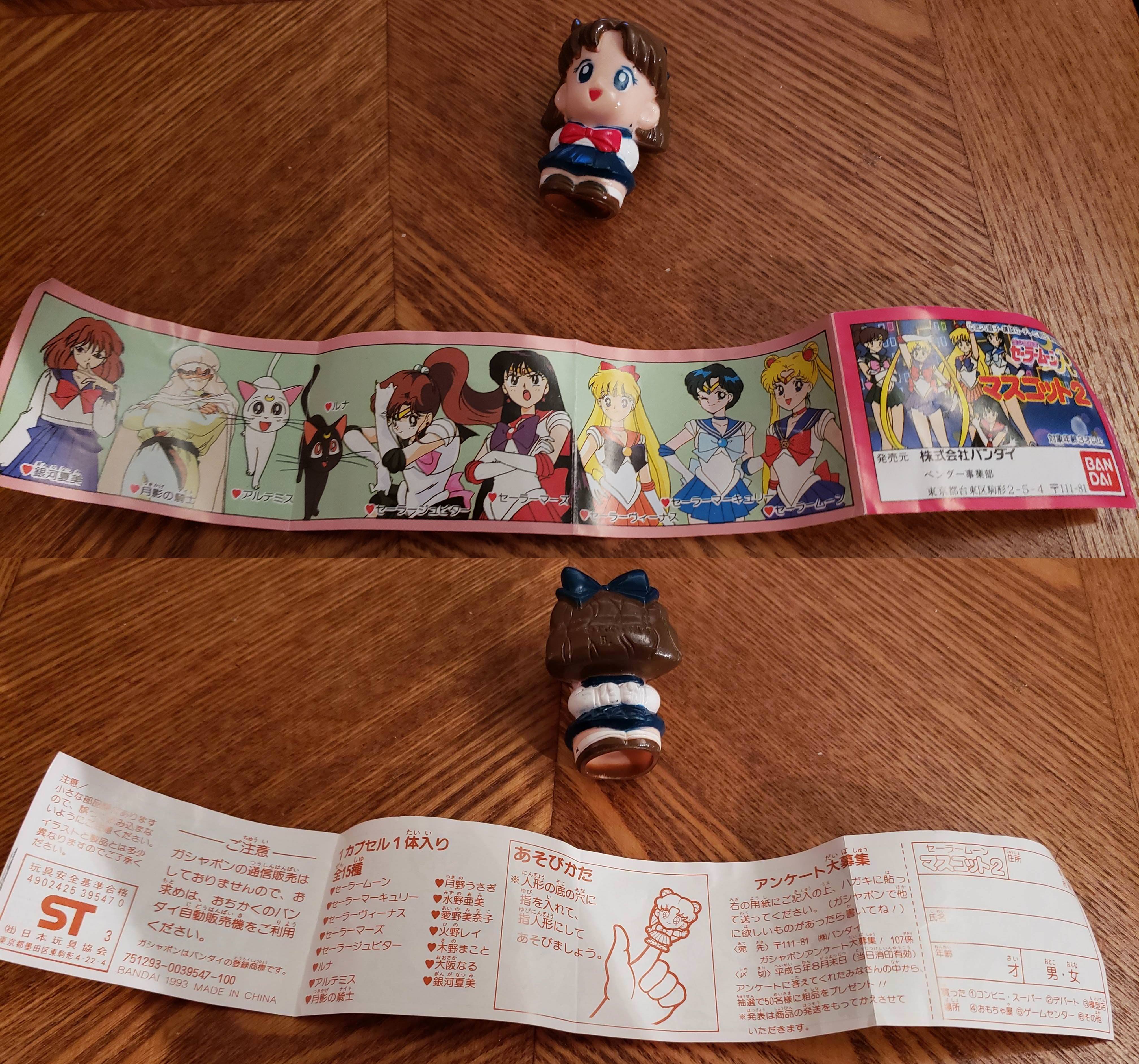 (Interesting how the paper lists En and the Moonlight Knight... did they get finger puppets too?)

EDIT: Pictures of the whole finger puppet line from Bandai can be found at SailorCheetara.com, including the En and Moonlight Knight puppets. Thanks to Diagnosed on the Galaxy Cauldron forums for telling me about that!

The style's a little mismatched, but they're about the same size! Which is fortunate since there's no Petite Chara figure of Naru (or Umino) 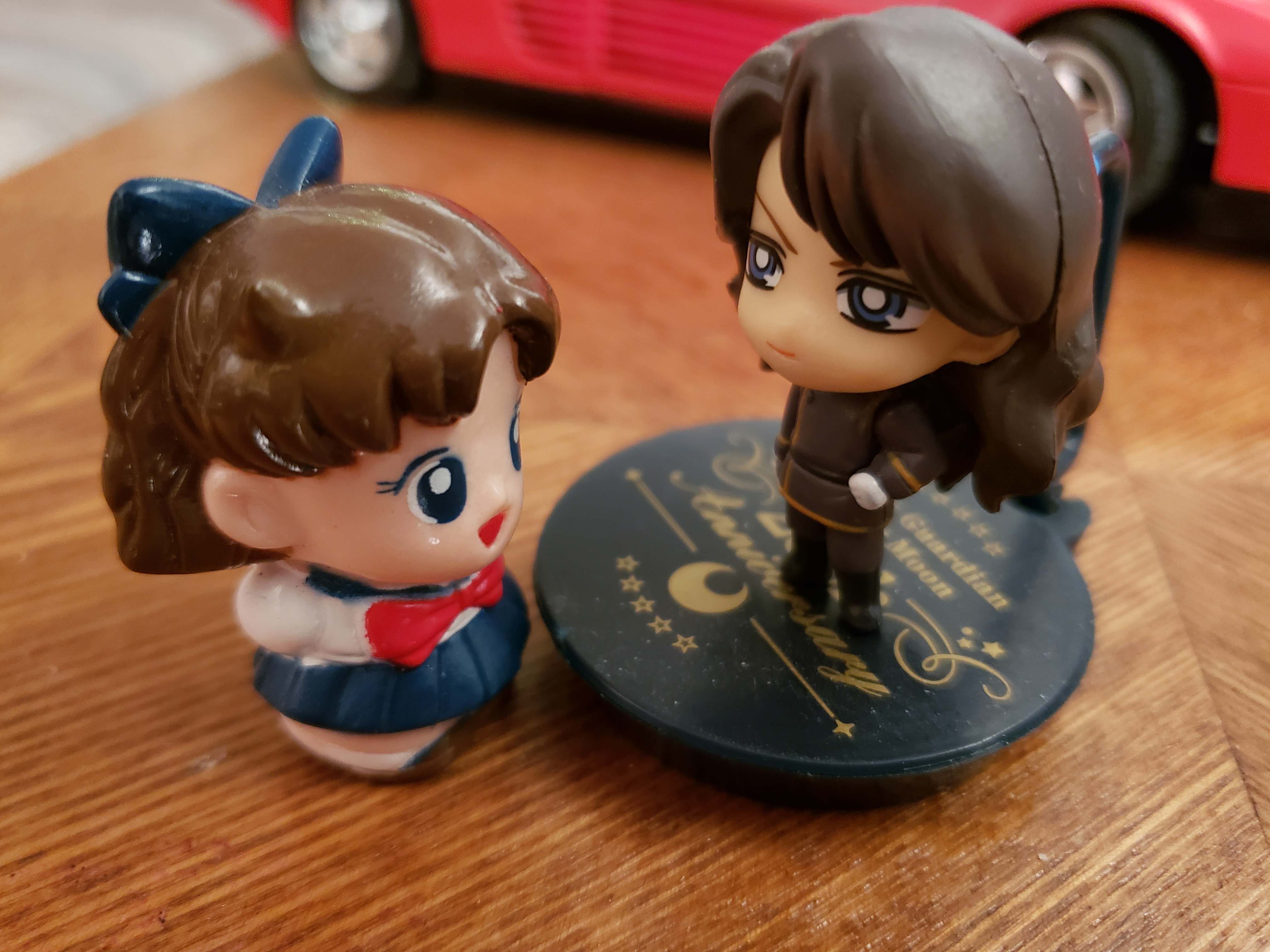 That wasn't all I got though... 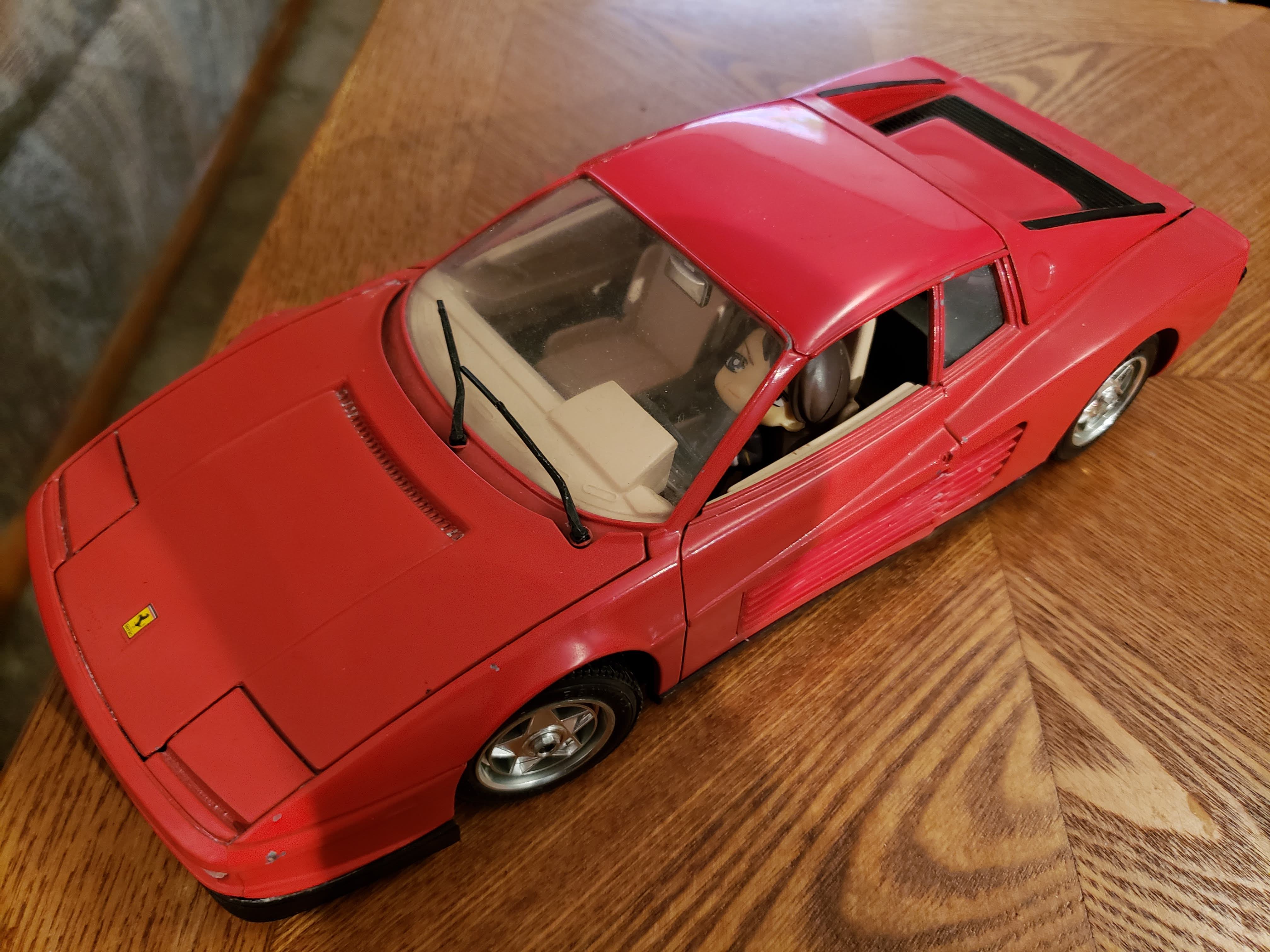 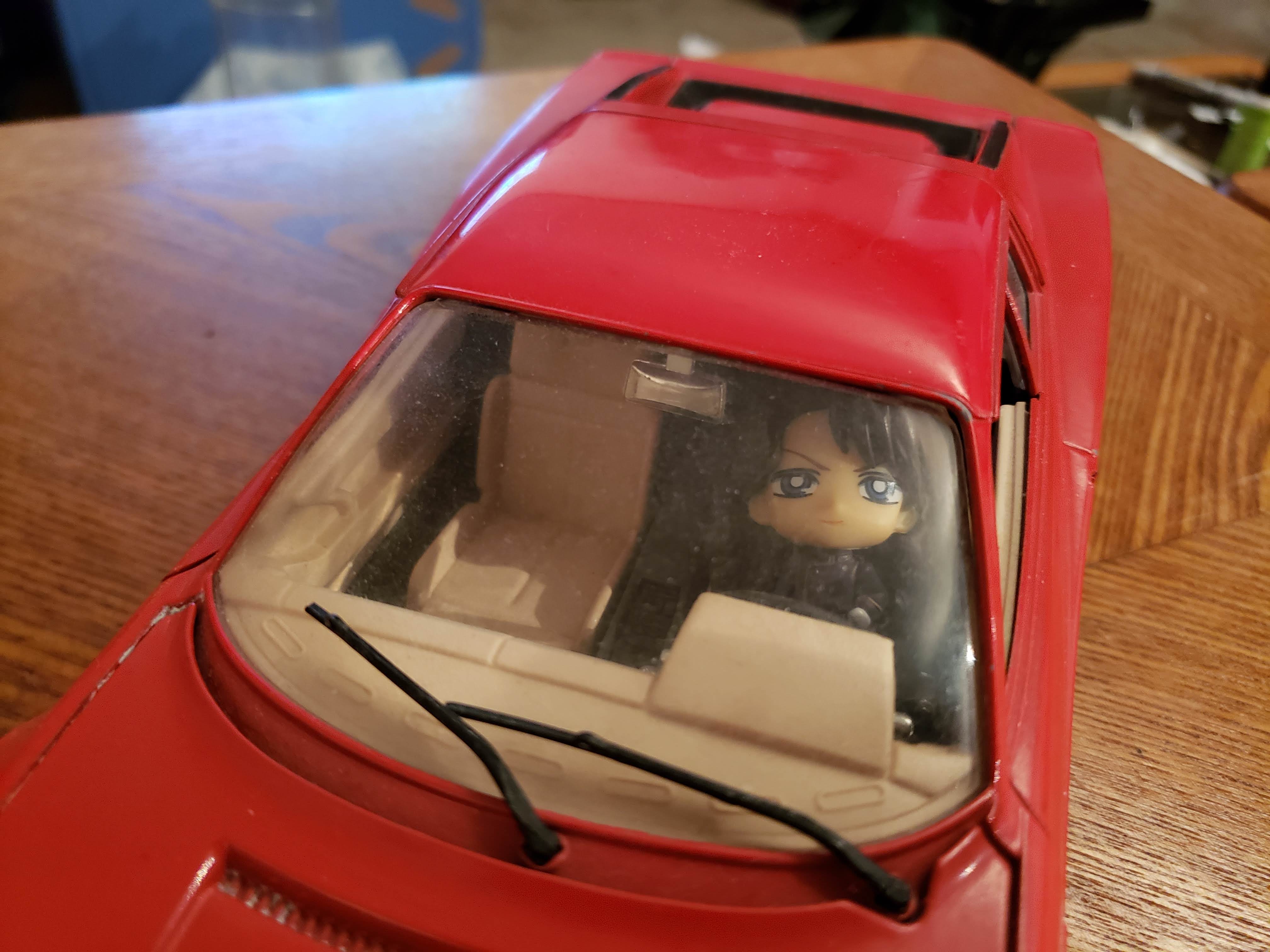 This, of course, led to some shenanigans for bootleg billionaire Masato Sanjoin and his beloved 1:18 scale Ferrari Testarossa 512TR which is apparently a 1984 model instead of a 1992 model now but who really cares. Also I put him on the base with removable mounting putty because I didn't want to risk breaking the stand by inserting and removing it from his head. 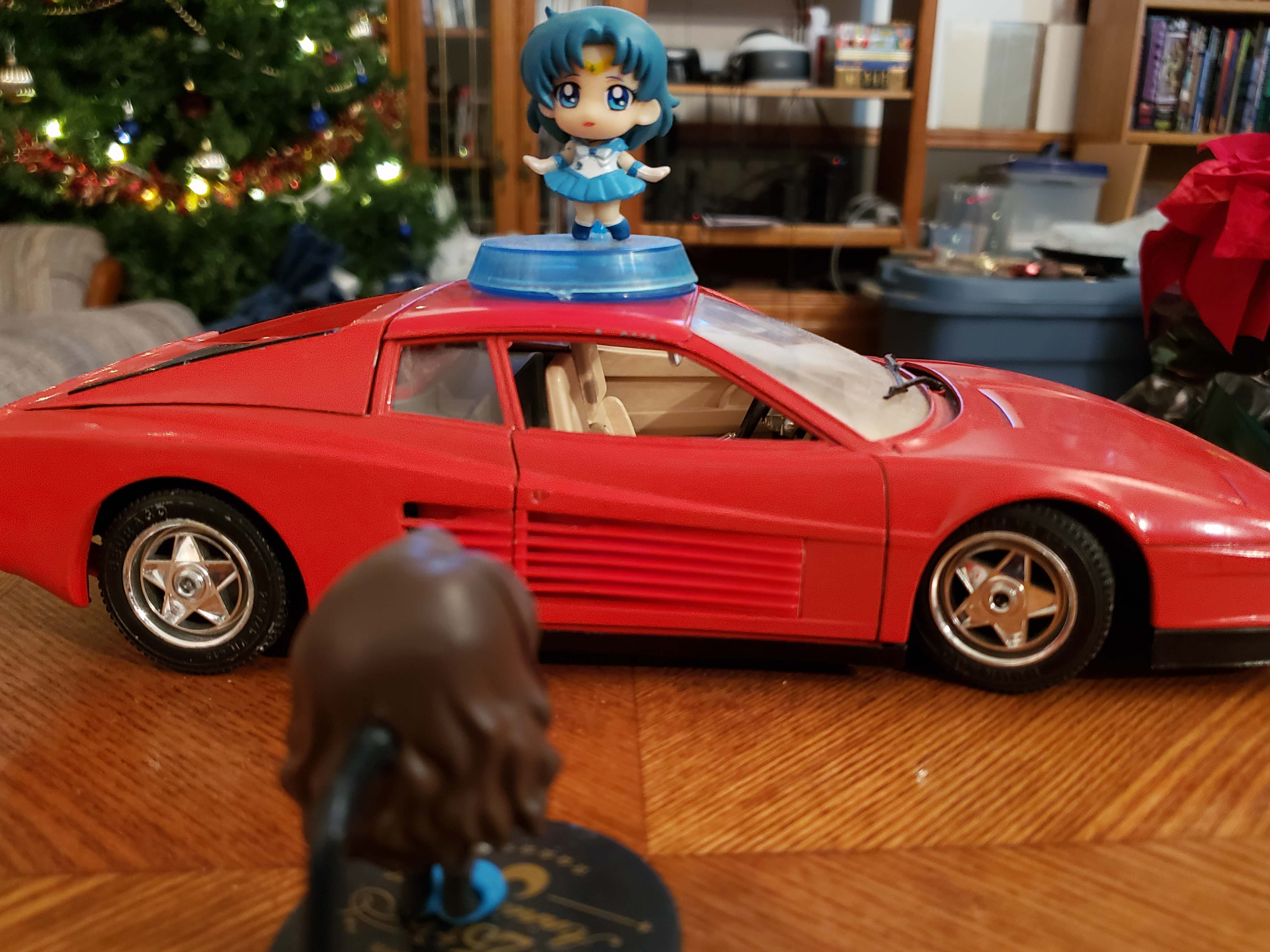 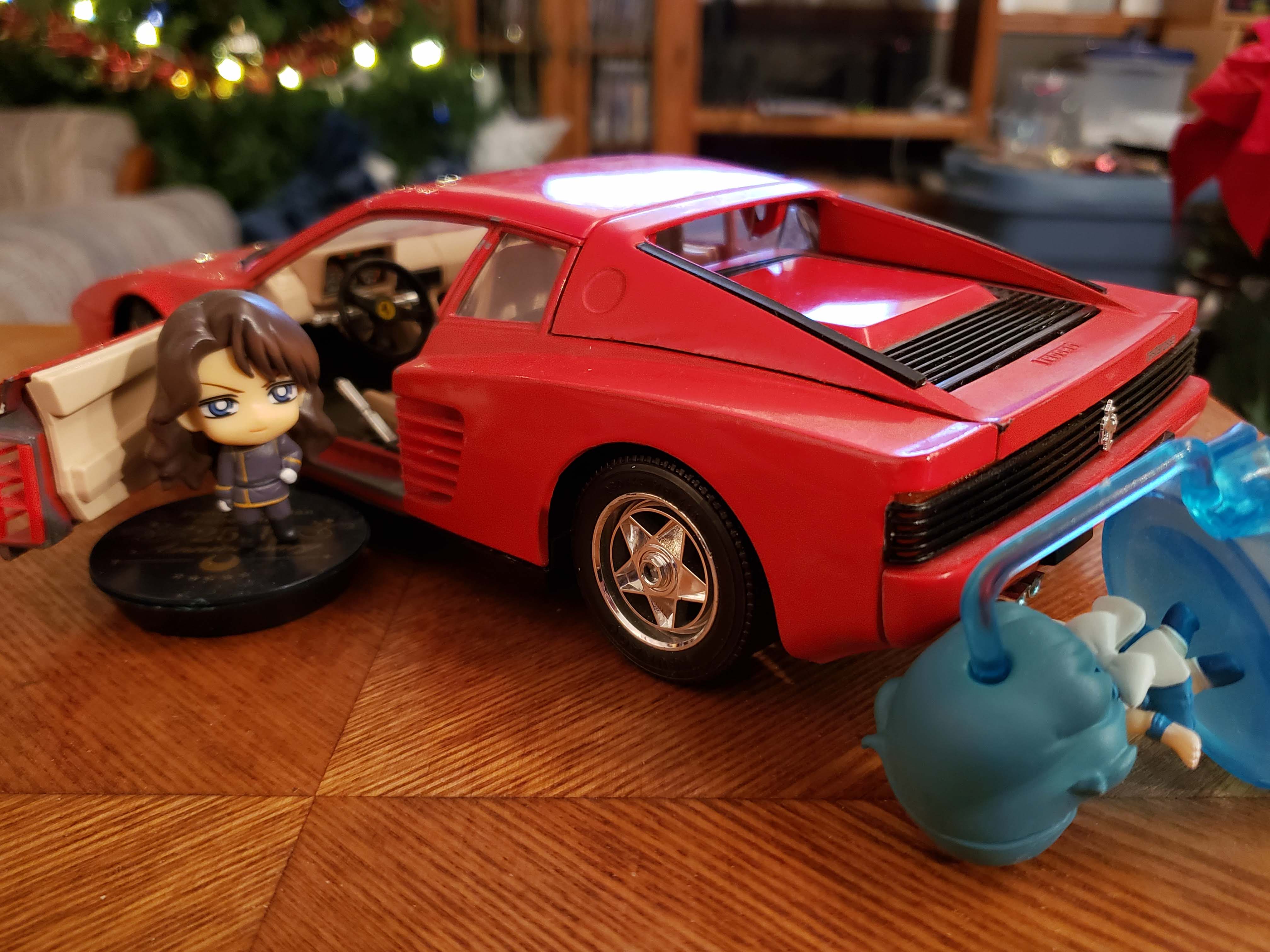 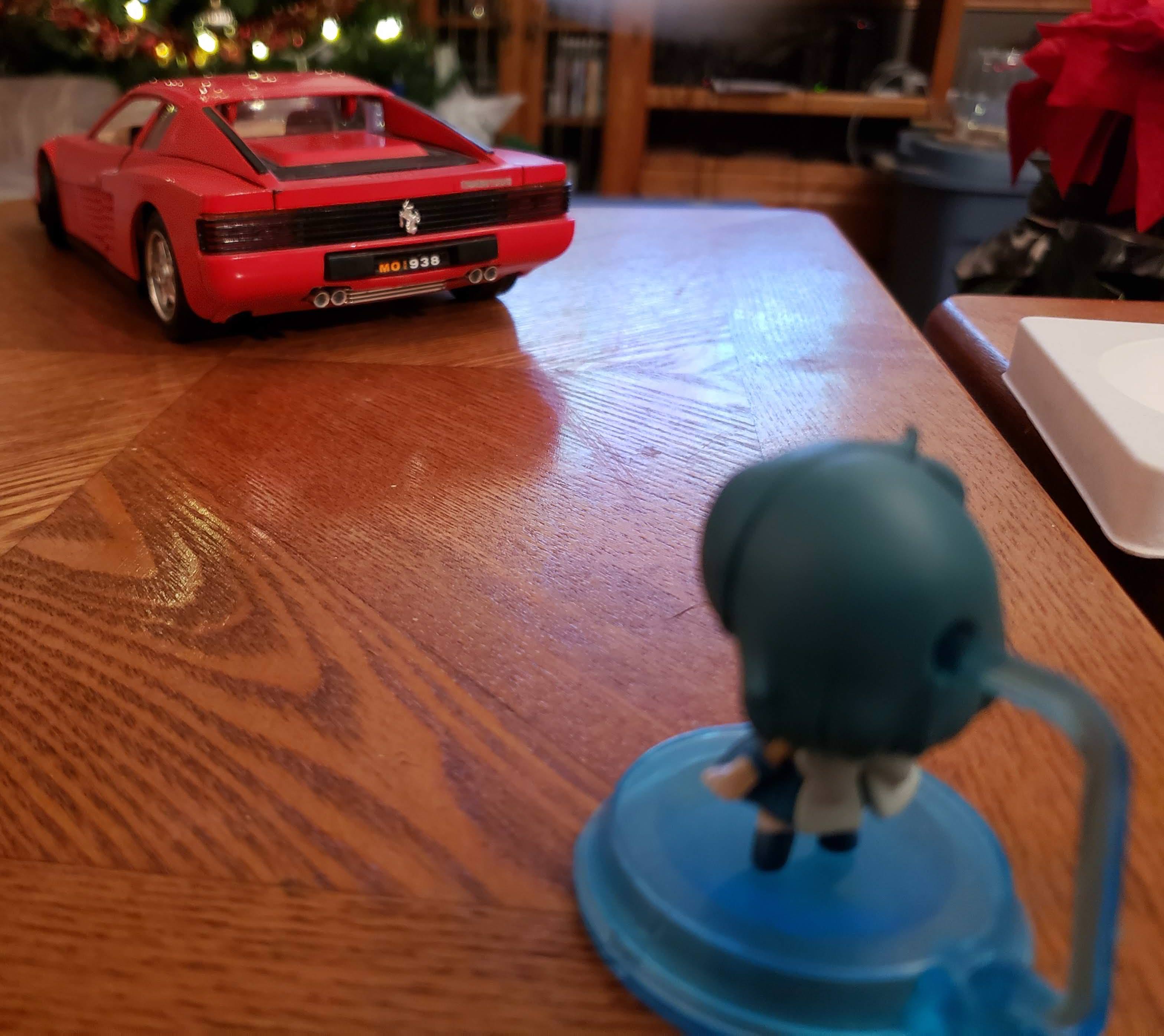 I think it worked out pretty well! 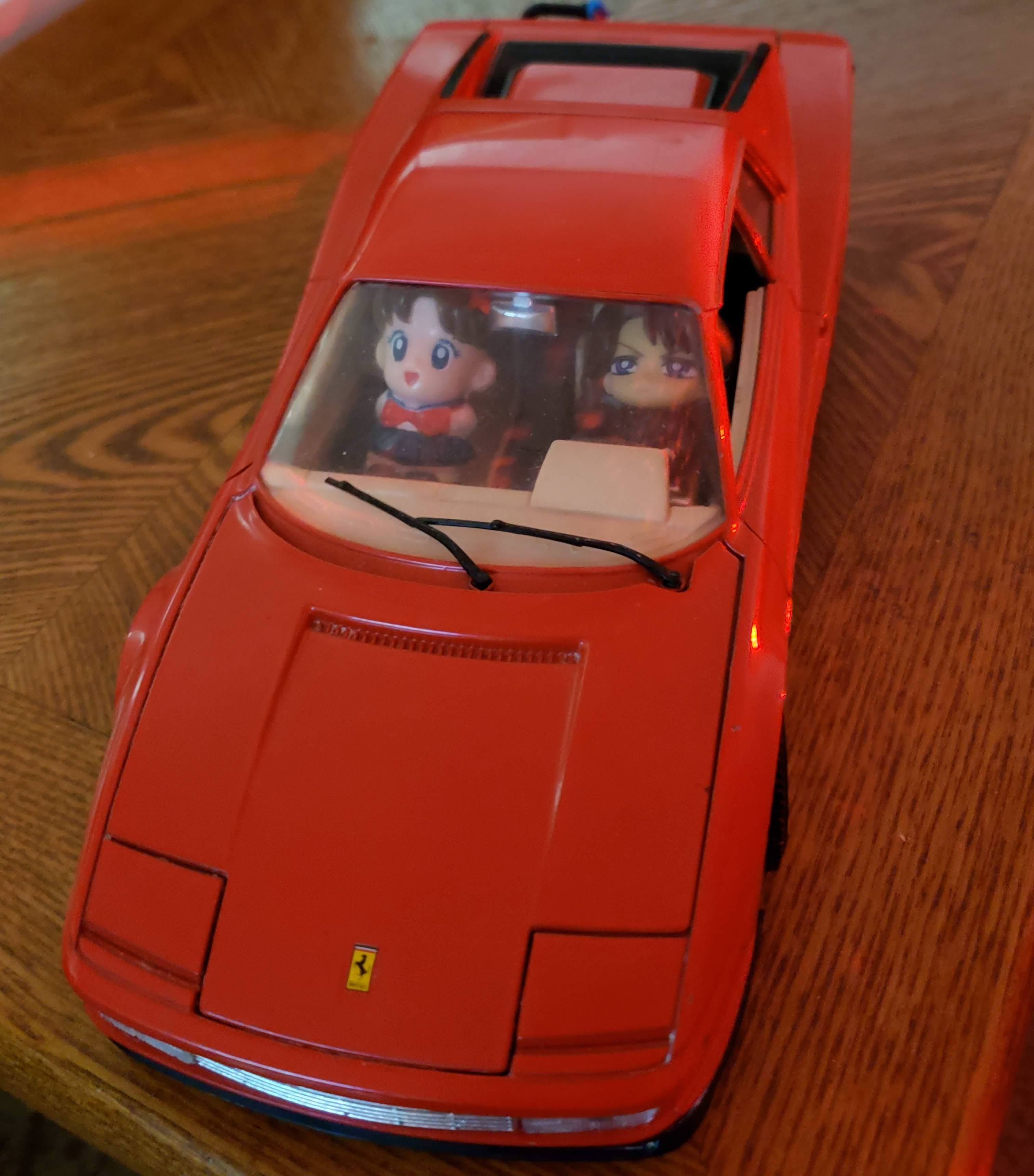 https://suicidalgamergirl.tumblr.com%2Fpost%2F181496469754
Debating to get the second half of this gashapon and another Eevee once my rent is paid.

I bought this enamel pin from StudioMinBinBin on Etsy! 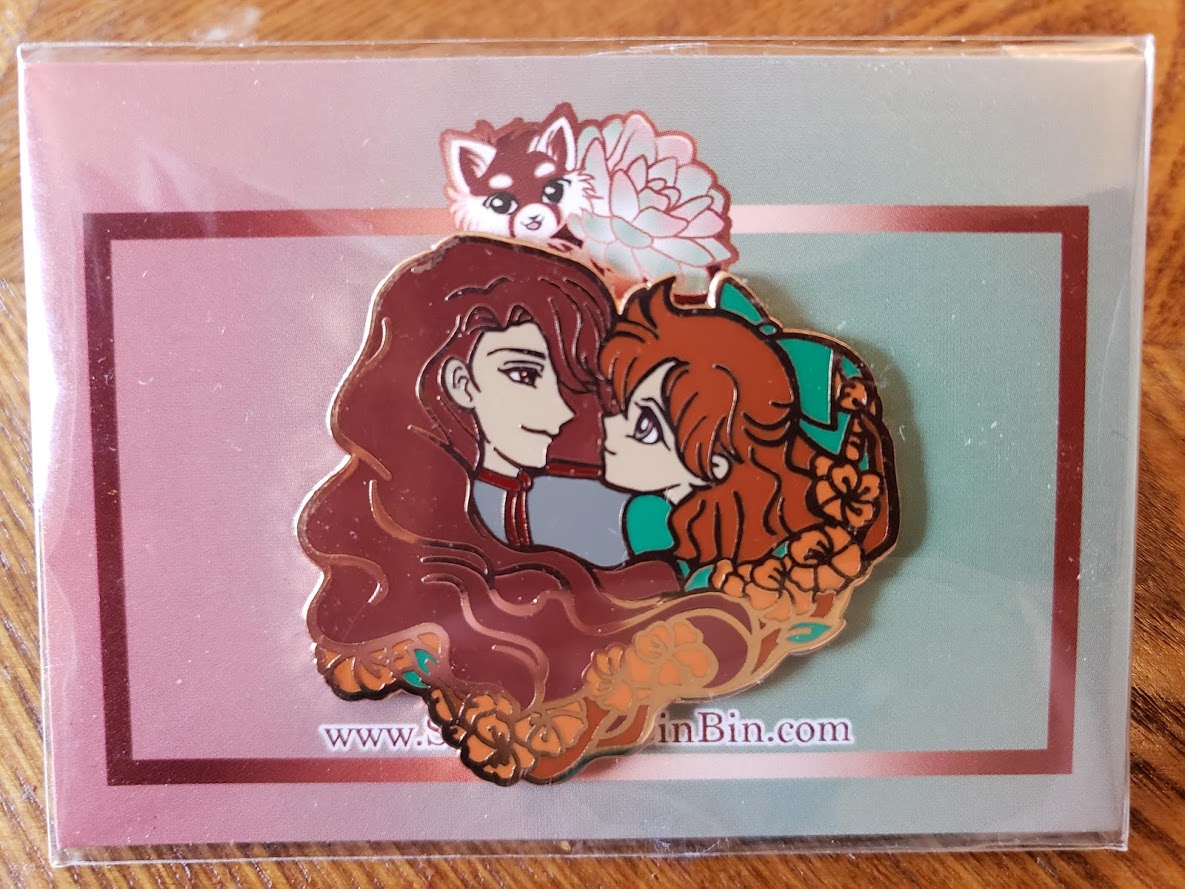 I'm not sure if they still make them or not (they ran out of stock when I bought it) but they do have some other pins, like a Zoisite / Kunzite pin. Sadly no Naru / Umino pin or I would've gotten that too (I support both ships).

Here it is with some stuff I showed pictures of earlier: 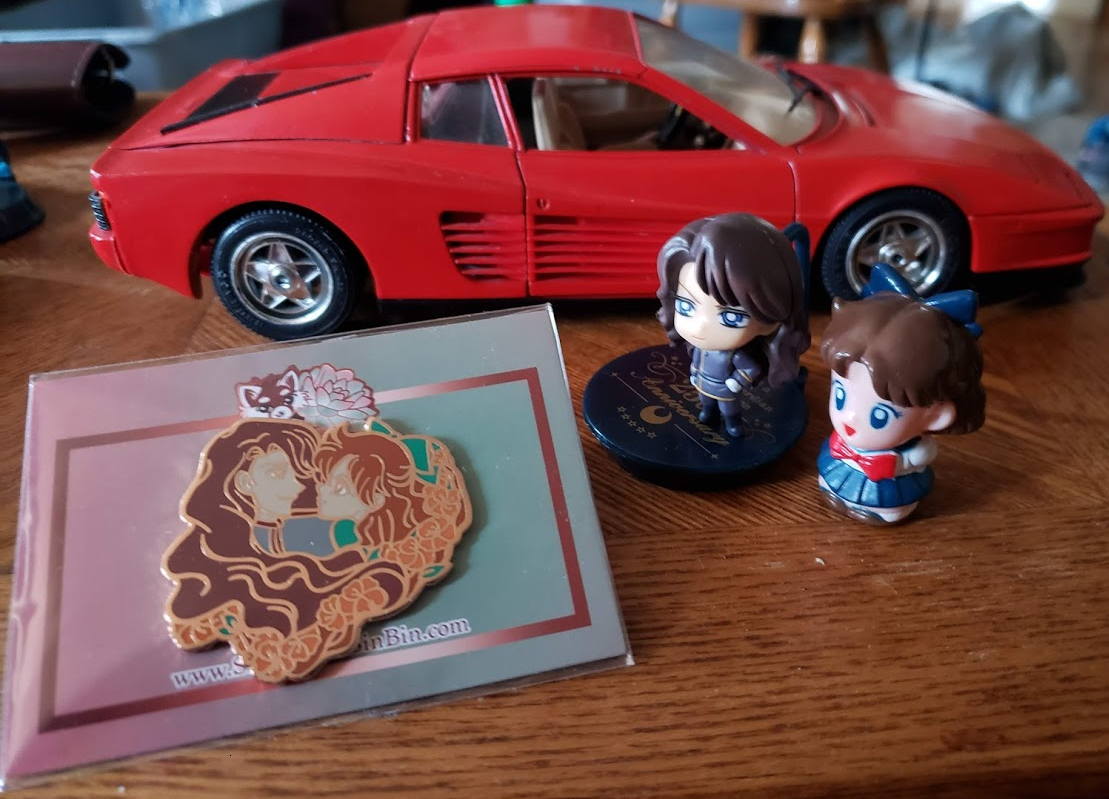 I had trouble with the camera focus / lighting though. I also tried photographing these guys again but it came out even worse quality:

Too bad I didn't think to have Beryl lurking in the background.

I also posted pictures of this stuff on my Deviantart page! (beware however that my deviantart page also includes various non-Sailor Moon works, some of which are marked as mature or may be otherwise disturbing.)

Hello! I'm Theresa and been a Moonie since I was 15! I got some Sailor Moon collectables I'll take pictures of and post! Sorry I just didn't know where to specifically post an introduction.

I have a budget of around $70 USD per month towards Sailor Moon. So far this year I am overbudget by $300 already because if I see an opportunity to get something rarer (those sample and dent box Pullips are tricky to get) I want or at a great price I will always take it. And I haven't even bought VIZ Stars yet... but S1 just got released in Australia by Madman so I will be shopping tomorrow. I have about as much control as Usagi when it comes to Usagi.
Usagi: "It's not good to base your philosophy for life, love and friendships around a 90s anime. In the name of the moon I will bankrupt you... in Sailor Moon Monopoly!"
奇跡 だって起こせる!
My Sailor Moon Figuarts/Rement Collection

I finally started one, with my other crap. 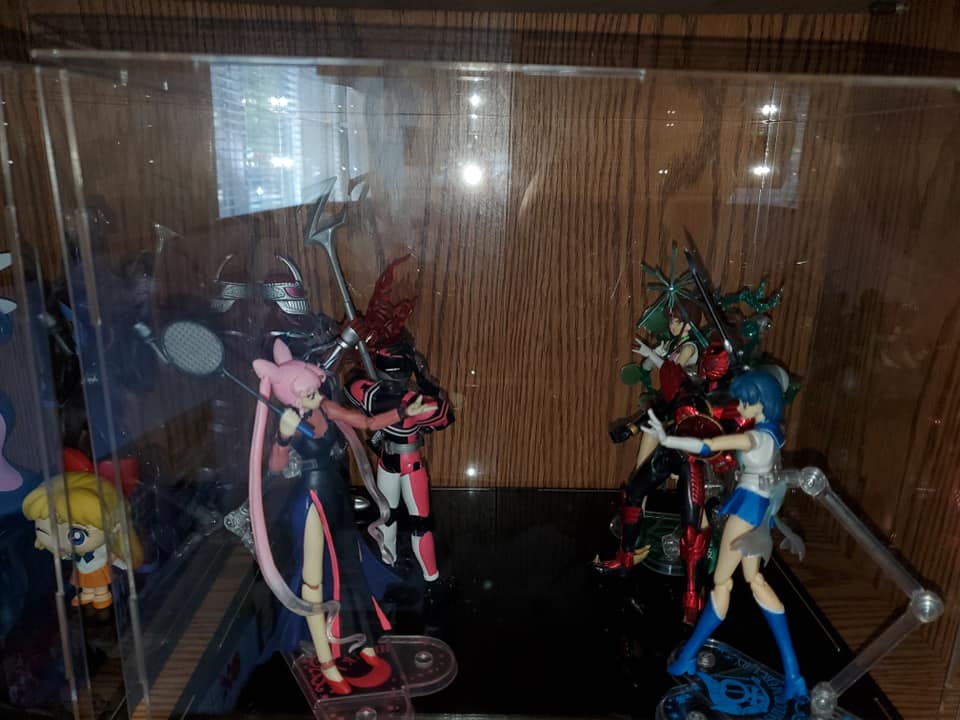 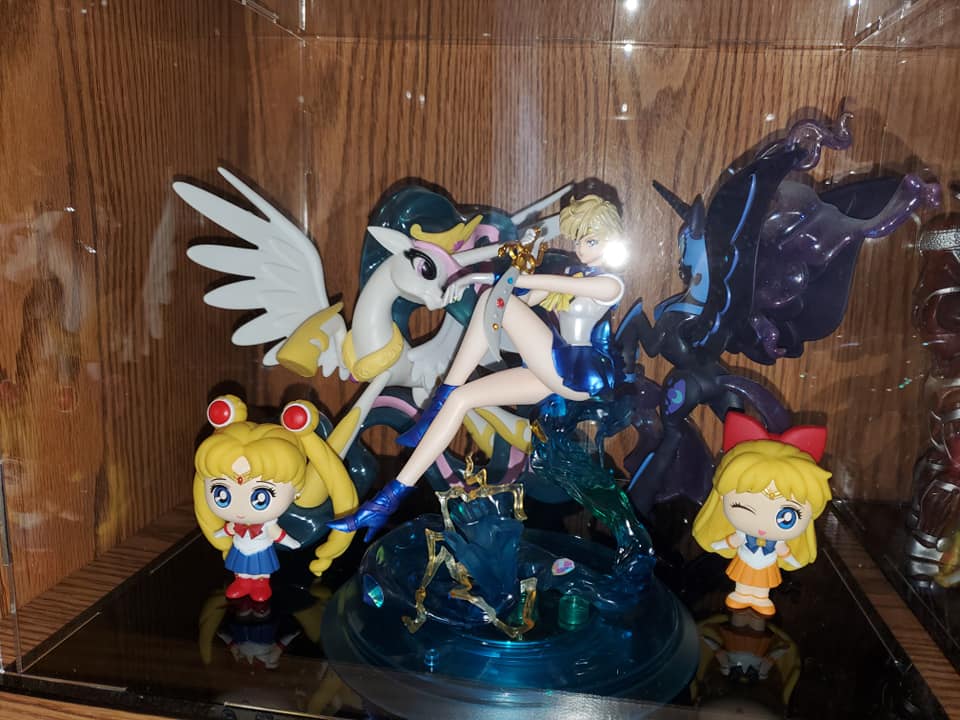 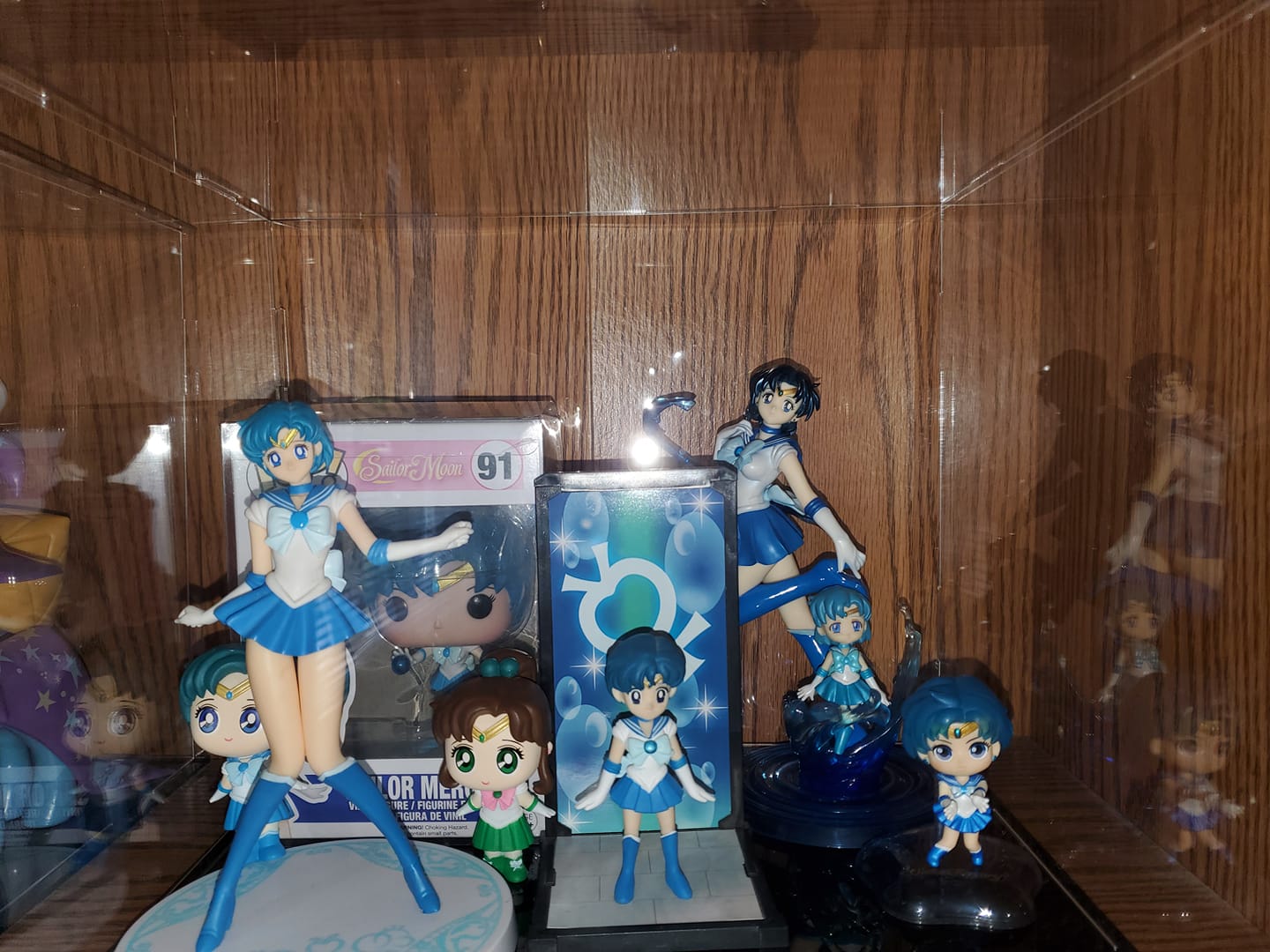